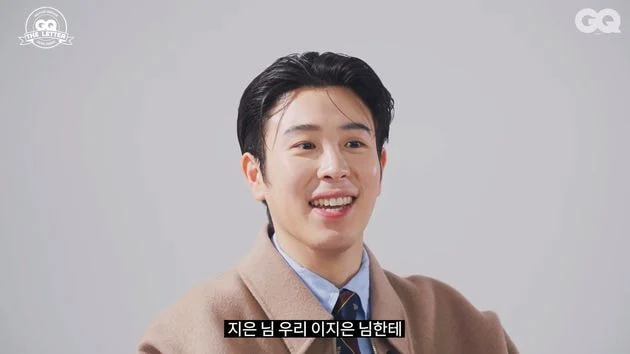 On the afternoon of the 6th, on the YouTube channel ‘GQ KOREA’, a video titled ‘P.O’s letter to fans before enlistment (feat. IU)’ was posted.

In the released video, P.O left a video letter to the people around him, including the Block B members, his best friend Mino, high school classmates, etc.

Finally, P.O wrote a video message to IU while he being cautious, saying, “If possible….no, no.” he said, “To Ji-eun, if it’s possible, I thought it would be very helpful to my military life if you could come to the army.” Still, P.O shyly said, “I was going to talk about this but I won’t,” and showed his fan’s heart”

t/n: the reason why it’s considered old-fashion and borderline controversial is because in the old days, girl groups were sent to perform in the army to “cheer up” men, it can also be seen as him inviting a girlfriend/woman to come and “console” him privately at the army and show her off as a ‘trophy’
original post: here
1. F*cking so so to say
2. Oh… Saying this is so ignorant
3. Seeing how he’s still calling her ~ssi even though they’re the same age makes you realize how awkward their relationship must be outside of variety shows, so why would he say something like thatㅋㅋ
4. Ah he’s not asking her to perform at the army concert but straight up asking for a personal invitation?… Hul I thought he was talking about a concert… Seriously they’re not even close, why would he ask her to come to the army to see him
5. Ignorant
6. Why is he acting like that? He seriously sounds like a grandpa
7. He’s asking a sunbae out who isn’t even close to him as a trophy
8. Whether they’re close or not, this isn’t something to joke around. “Inviting women to make army life easier” this kind of mindset is so old-fashion… Why are there so many people who can’t progress?
9. I used to like P.O but whether they are close in real life or not, I hope he refrains from making this kind of comments… Who he’s trying to call isn’t the issue here. The issue is that he thinks that bringing a female celebrity in the army will make his army life ‘easier’
10. Saying something like that to someone you’re not close with?
[instiz] IF IU CAN COME, P,O REQUEST FOR ARMY VISIT… THE LINE BETWEEN A FAN’S HEART AND BEING IGNORANT
original post: here
1. I wouldn’t call this ignorant, but it puts burden to someone
2. Why is this an issue..? They’re acquainted to each other.. Of course if they didn’t know each other, it’s another story, but it’s not like that either
3. They know each other, of course he can say stuff like that, I feel like it’s fine..
4. Aren’t they close?ㅋㅋㅋㅋ
5. They’re close, why is it considered rude?ㅋㅋㅋㅋ
6. What the… As long as IU accepts the comment who are you to judge?
7. Didn’t they shoot a drama together?ㅋㅋㅋ
8. No but even if they’re close, why would he want her to come to ‘help his army life’?
9. He’s just saying whatever who caresㅋㅋㅋㅋ So many sensitive people nowadays
10. So you can’t even say stuff like that to people you’re close with?
theqoo