T/N: this whole dating rumor was started by controversial YouTuber Sojang because Jiho thanked Kim Shinyong instead of her members in a thanks to and other random things) 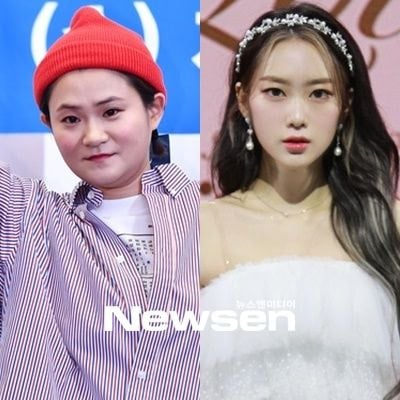 On the May 20 broadcast of MBC FM4U’s radio program ‘Kim Shin Young’s Noon Song of Hope’, comedian Kim Shin Young personally addressed recent rumors surrounding her and former Oh My Girl member Jiho.
Earlier this week, rumors that comedian Kim Shin Young and Jiho were dating, and even speculations that their relationship was the reason why Jiho decided to leave Oh My Girl, spread via numerous online communities
Now, during her very own radio program, Kim Shin Young opened up by saying, “For the first time in so many years, people sent me so many messages in various group chat rooms. They sent me all of the links, so I looked at all of them. Some really baseless rumors have been going around. But my rumors are usually like this, always in the extremes, no middles. At first, I was like, ‘There’s no way anyone actually believes in this stuff’, but apparently, it has been going around a lot.”
Kim Shin Young continued, “The staff of this radio program know me very well, so they know that I love giving people stuff. So when that’s the reason for these rumors, it’s just ridiculous. And in the comments, there are so many malicious attacks about my face and my outer appearance. But I’m going to say right now that if you meet me in real life, I promise you, I’m not that ugly. A lot of people are calling me ‘grandma’, but for someone in her forties, I look pretty young.”
The comedian then emphasized, “The most important thing about this is that the rumors are not true. Wow, I had no idea that I appealed to people in that regard. But to be honest, we can’t just wave this off as another funny rumor, because some people may have been hurt. You people are not taking responsibility for your hurtful comments. If there’s something you really want to say to me, come see me at MBC.”
Lastly, Kim Shin Young relayed, “There is a close dongsaeng of mine who is starting a new chapter of her life. So please cheer her on. Please do not stand in the way of someone with such a bright future, and cheer for her with a good heart. Once again, I’m going to say, it’s not true. Yes, it’s true that she wore my clothes once. But I let her borrow it. That’s all.”
CR: Allkpop
original post: here
1. What the f*ck is this…
2. How can these wrecker-bugs do this? (T/N: “wrecker/렉카 = Someone who publicizes and issues other people’s misfortunes, accidents, mistakes, flaws, and wrongs on the Internet. Regardless of whether it benefits them or not.) And what’s up with the IQ of people who believed this?
3. These f*ckers are f*cking diligent to be living like this tsk tsk
4. Both of them are so pitiful ㅠㅠ
5. My friend was talking about this to me yesterday and assumed that it was already true so I was so shocked. Were there a lot of proofs?
6. What the hell is this? Were there really people who believed this?
7. Hul you’re telling me that people believed this? Wow
8. ? There was a rumor between Kim Shinyong and that idol? It’s not just a speculation based on their lovestagram but a real rumor?
9. Ah f*ckㅋㅋㅋ seeing the comments here, there were indeed people who believed this. You fools…
10. Seriously being a celebrity is hell….
[instiz] KIM SHINYOUNG, CLARIFIES DATING RUMORS WITH FORMER OH MY GIRL’S JIHO “SOME PEOPLE MAY HAVE BEEN HURT”
original post: here
1. I heard it first from wreckers. Just why aren’t we getting rid of those evil accounts?
2. This showed up a few years ago already and idols’ fans all knew about it
3. They claim that these two had a lot of couple items and insisted that they were a couple. Don’t people who are close friends usually share a lot of couple items? Seeing this, people would think that I was dating my bestfriend or something
4. Korea sure is big… people are impressive
5. No but why are they believe that person’s words?… It’s not like they only made up 1-2 rumors
> I’m shocked that so many people believe them
6. No but just why would they believe them?ㅋㅋㅋㅋㅋㅋㅋㅋㅋㅋㅋㅋㅋㅋㅋㅋ
7. Why would you believe that video… it’s honestly ridiculous
8. Pathetic..
9. There were so many posts on the Internet asking if it was true
10. I’m shocked that that YouTuber still hasn’t gotten reported..
theqoo