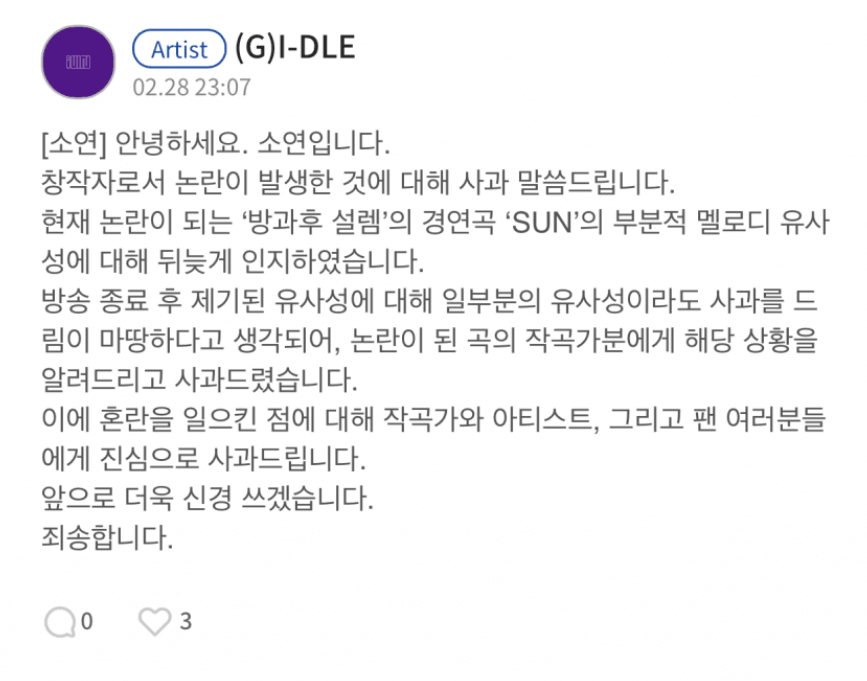 “Hello. This is Soyeon.

As a creator, I want to apologize about the controversy that have emerged.
Currently, we belatedly recognized the partial melody similarity of ‘Sun’, the contest song of “My Teenage Girl”, which is currently under controversy.
Regarding the similarities (between the songs) raised after the broadcast ended, I thought it was appropriate to apologize for even a partial similarity, so I informed the composer of the controversial song about the situation and apologized.
I sincerely apologize to the composer, artists, and fans for causing confusion.
I will be more careful going forward.
I’m sorry.”
original post: here
1. Legendary
2. So who’s gonna get the credit for this?
3. “Partial similarity”
4. Didn’t she used a music software illegally last time?
5. So credited him without consent and is now apologizing so did they consent now?… I found the whole chorus similar so it’s funny how she’s claiming it’s “partial”
6. One school violence assailant, one CCP supporter and one plagiarizer all in 1 group. It’s impressive that they’ve had 3 blows in a row
7. “Similarity”ㅋㅋㅋㅋ
8. She’s claiming that it was “partially similar” but they totally stole everything
9. Didn’t she get hate for using a producing program illegally?
10. “Partially~”, “one portion~” it’s damn easy to apologize
theqoo