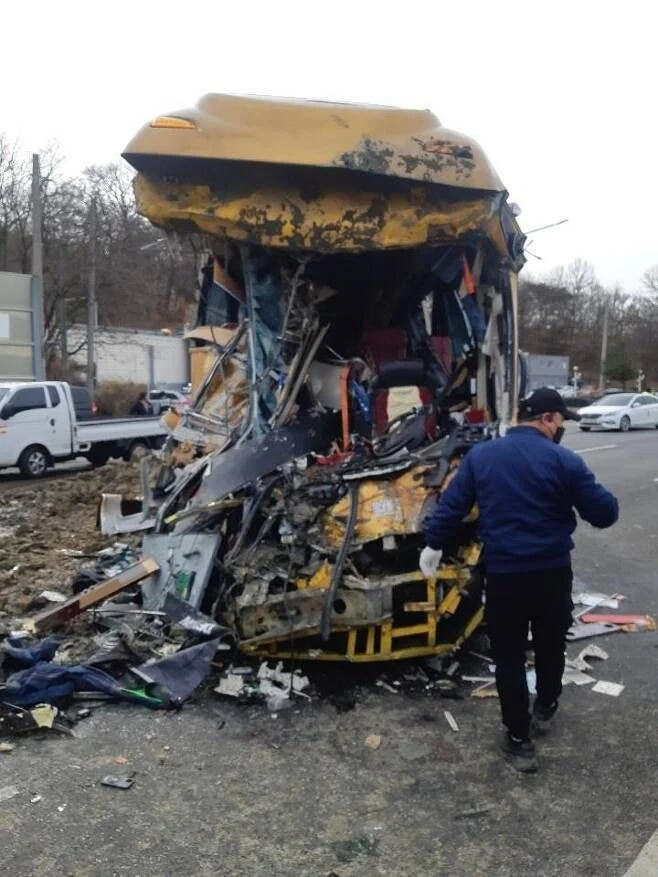 On the morning of March 31, a drama production team bus headed toward Paju, Gyeonggi Province via freeway collided with a freight truck.

One man in his thirties was pronounced deceased on the scene, while ten others were transported to the hospital. Reports stated that three of them suffered serious injuries, while seven suffered minor injuries.

The bus belonged to the production crew of tvN’s upcoming drama series ‘Joseon Therapist’. tvN has now confirmed that the deceased man in his thirties was a drama PD.

In a press statement released on this day, tvN additionally relayed, “Earlier this morning, the production and filming crew of ‘Joseon Therapist’ was headed toward our filming studio in Paju, Gyeonggi Province. However, on the way, the crew bus was hit by a freight truck. The freight truck, after pumping gas at a nearby gas station, forcefully attempted to merge onto the third lane, causing the accident. One staff member has died on the scene, while two other members of the production team, and three other members of the equipment crew are in critical or severe conditions. Currently, our staff members have been transported to various nearby hospitals. We are currently working to ensure that we confirm the location of each of our staff members during their treatment.”

original post: here
1. Look at how the car turned outㅠㅠ Rest in peace..
2. Ha why would you squeeze yourself in this hard?ㅜ
3. Hul crazy for dump trucks that big, they need to be even more especially cautious when driving. This bas*rd truck driver doesn’t even understand that a single car per lane, how can he be a truck driver?
4. ㅠㅠㅠㅠㅠㅠㅠㅠ Rest in peace..ㅠㅠ
5. This is such a huge accident ㅠㅠ.. Rest in peace
6. If we’re talking about that time (T/n; they were caught in an accident at 7AM) they must’ve been on their way to work aigo..
7. Hul ㅠㅠ What to do.. I hope the ones in critical situation recovers fast.. And that the person who passed may rest in peaceㅜ
8. To think that those truck drivers are outlaws on the roads make me want to swear
9. Seriously dump trucks drivers will most likely never die due to the size of their trucks so they allow themselves to drive like f*ckers. Once again, they ot to live this time, We need to make laws for those f*ckers for driving with negligence
10. This is 100% the truck driver’s faultㅠㅠㅠ rest in peace
theqoo