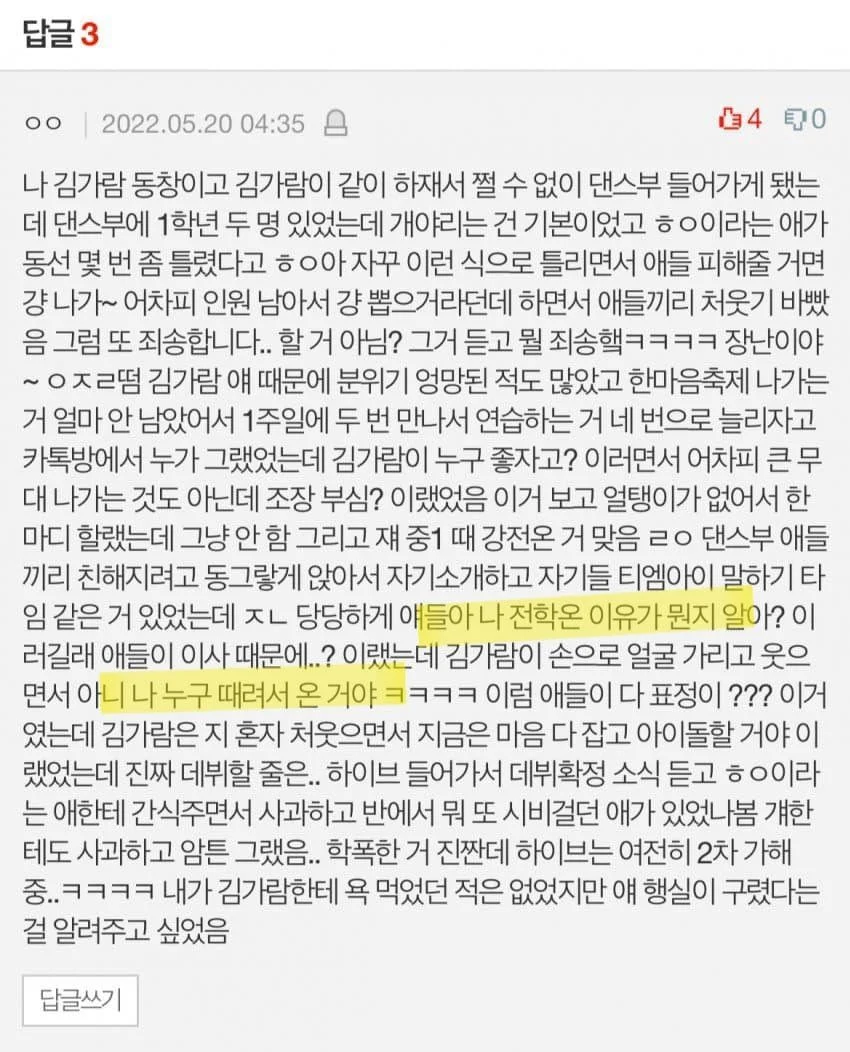 “I’m a classmate of Kim Garam and Kim Garam asked me to join the dance club with her. It couldn’t be helped so I joined the dance club with her. There were 2 people from the 1st grade in the dance club and there was this kid called HY who got the moves wrong a few times so Kim Garam said “HY-ah, if you’re making mistakes like this and being a nuisance to the other kids, just get out~ anyways there are other members left so we can just pick from them” and the other kids were just busy laughing at her. But then, when HY said “sorry”, Garam would say “What are you sorry for?ㅋㅋㅋㅋㅋ it was a joke~” and bullsh*t like that. Because of Kim Garam, there were a lot of times that the mood was ruined. There wasn’t much time left before the Youth Festival but we would meet twice per week to practice so someone said to increase it to 4 times a week. And Kim Garam said “whose idea was it? Anyways, it’s not like we were performing on a big stage. Are you acting like the boss?”. I was so dumfounded when I saw this that I was gonna say something but I didn’t. Also,, it’s true that she was forced to transfer in her first year of middle school. There was a time the kids at the dance club were sitting in a circle to get to know each other and do self-introductions, so we had to say a TMI about ourselves and she f*cking confidently said ‘kids, do you know why I was forced to transfer schools? and the kids were like “because you moved houses..?” And Kim Garam covered her face with her hand and laughed while saying “no, I transferred because I hit someoneㅋㅋㅋㅋ”. All the kids’ impression were like ‘???’ and Kim Garam was the only one laughing and said “I pulled myself together now and will be an idol” but who knew that she would really debut… When we heard about the news of her debuting under HYBE, she went to HY and gave her snacks and apologized. Seems like there was another kid who had beef with her in the class but anyways, she went to apologize to her too.. It’s true that she was a school violence assailant and HYBE is just doing the secondary assault now..ㅋㅋㅋㅋ I was never cursed at by Kim Garam but I want to let you know about her bad behaviour.” 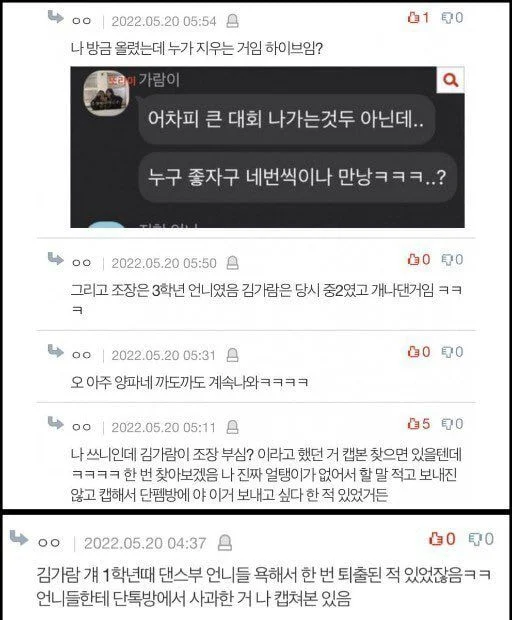 “(Replies to the comment above)
– I just posted this but someone deleted it. Is it you HYBE?
(Screenshot: Kim Garam: Anyways, Anyways, it’s not like we were performing on a big event so.. Whose idea was it to meet 4 times a weekㅋㅋㅋ..?)
– Also, the club leader was a 3rd year unnie. At that time, Kim Garam was in her 2nd year of middle school. She was f*cking acting upㅋㅋㅋ
– Oh she’s such an onion. No matter how much you peel, it keeps coming outㅋㅋㅋㅋ
– I’m OP and I must have a screencap of when Kim Garam said “are you acting like the boss?” somewhereㅋㅋㅋㅋ I’ll try to find it. I seriously was so dumfounded. I wrote something but didn’t send it. I took a screenshot and told people in the FB group chat “yah I wanna send this (screenshot)”

– When Kim Garam was in her 1st year, she cursed at the dance club unnies and was kicked out onceㅋㅋ I have a screencap of her apologizing to the unnies in the group chat” 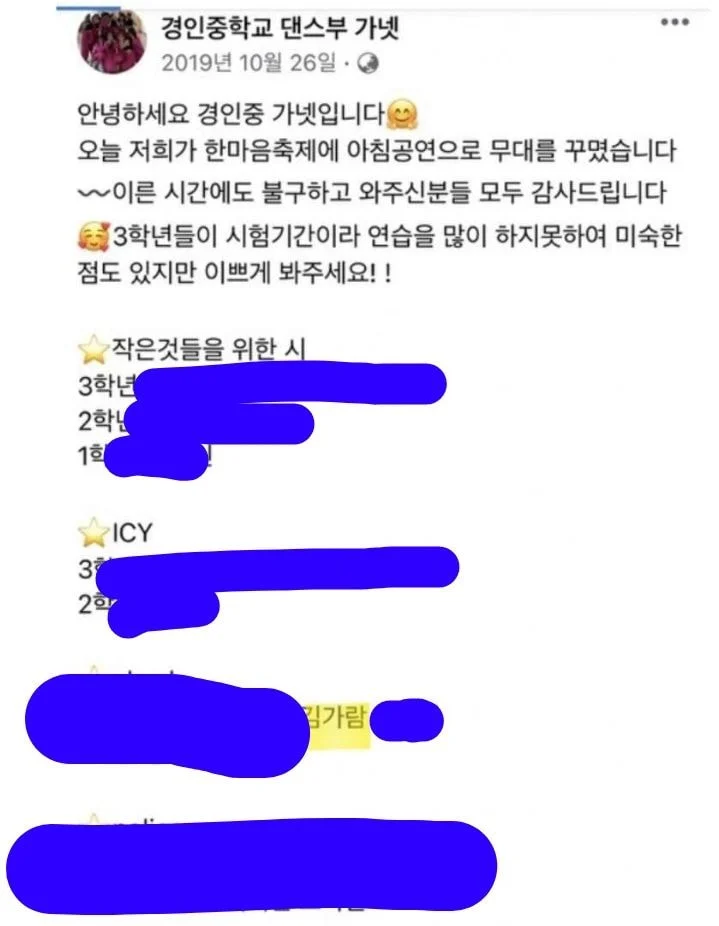 The more you peel, the more comes out, wow
original post: here
1. Is she sick in the head for cosplaying as the victim despite all of this?
2. Just how bad were her behaviour….
3. Stinky tofu
4. And the company who made her an idol and protected her debut is the most disgusting
5. What’s f*cking funny is that evidences that support her 5th level punishment claims just keep coming out even now ㅋㅋㅋㅋ isn’t this over for her? The proofs of her school violence keep on pouring out
6. Wow it’s impressive how evidences are just piling up like this
7. Ah that’s why everyone knew that she was forced to transfer, crazy…
8. How can she become an idol like that?…
9. This is honestly legendary
10. They must be exposing her even more because of HYBE’s statement ㅋㅋㅋㅋㅋㅋ HYBE are seriously f*ckers
theqoo