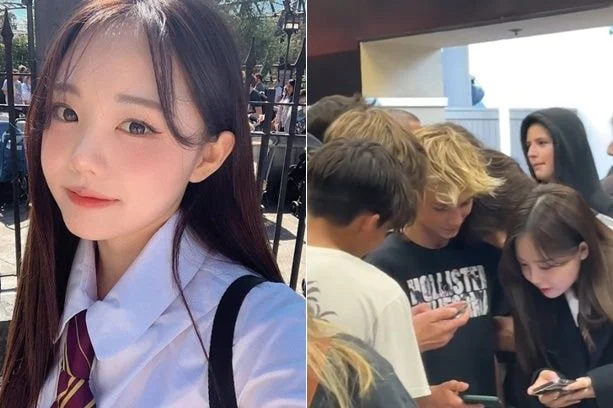 On her Instagram on the 22nd, Hong Youngki wrote, “Can I be this happy? Universal is a dream-like place so its energy is pouring out.”
She continued, “Even junior high school Western boys asked for my phone number, but they said they were elementary school students in Korean age.” She added, “I couldn’t tell them my age. Making friends with Westerners was on my bucket list, but who knew that I would become friends with elementary school students.”
In the photo, Hong Youngki was wearing a school uniform and looking happy while looking around Universal Studios. She also exchanged phone numbers with local boys who were taller than her. Actor Lee Ji-hoon, who saw this, left a comment saying, “I envy you.”
source: https://n.news.naver.com/entertain/now/article/008/0004723033
original post: here
1. She indeed would look baby faced to Westerners but she also looks super young…
2. I am aging like my age but when I went to a concert overseas, the security asked me where my mom was
3. She seriously has a baby face
4. If she’s 149 cm tall, she would be mistaken as a choding even in Korea
5. Hong Youngki is still as pretty and cute as ever
6. Hong Youngki is already 30? Wow..
7. She looks young to Westerners but she’s a special case of baby faceㅋㅋㅋㅋㅋㅋㅋㅋㅋㅋㅋㅋㅋㅋ
8. It’s because Hong Youngki is 149 cm tall and her face looks like a babyㅋㅋㅋㅋㅋㅋㅋ her face is the same as when she was young
9. The inferiority complex in the comments is nasty
10. No but why does it matter if Hong Youngki is wearing an uniform or not? She has a legendary baby face whether or not she wears an uniform….
11. Hong Youngki’s frame is small too so they have all the reasons to think that she’s young… meanwhile, she’s born in ’92 so it’s not like she was actually old
12. But isn’t wearing uniforms at Universal the norm just like Hogwarts??ㅋㅋㅋ
13. She’s seriously shorter than I thought so I would’ve believed you if you said that she was a choding
theqoo