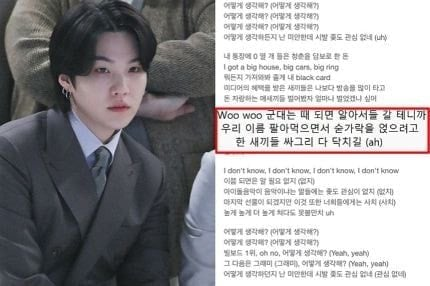 “Woo woo, we’ll be sure to go to the military when it’s time, 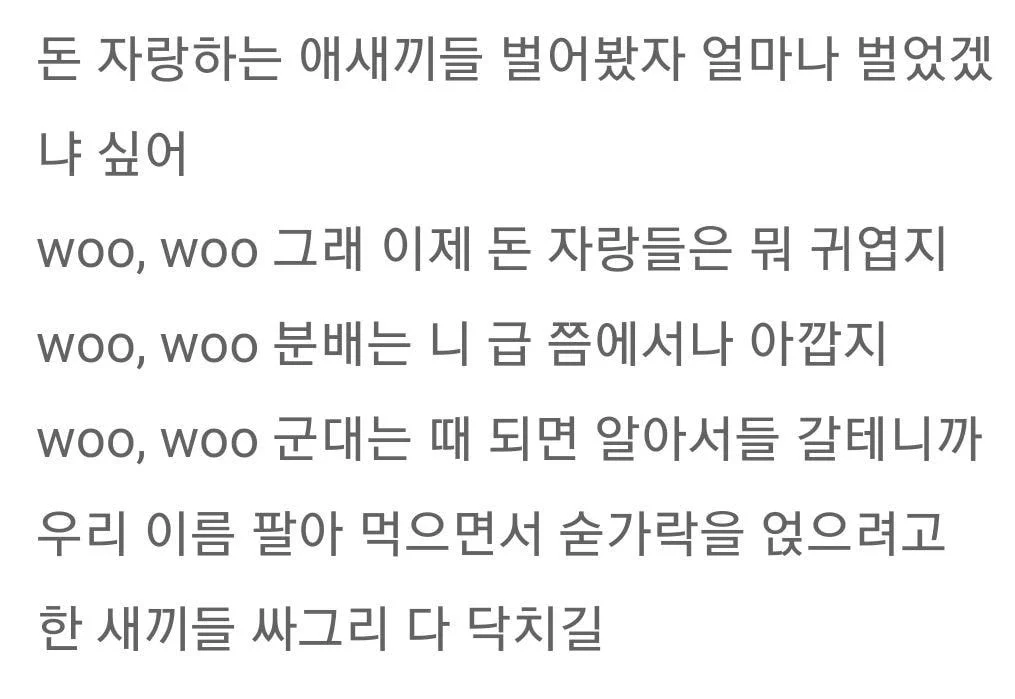 “And the brats that boast about their money, you have to wonder how much they could’ve actually earnt
Woo woo, yeah, money boasts are only cute to me now
Woo woo, dividing it only feels bad at your level
Woo woo, we’ll be sure to go to the military when it’s time,
so All the bastards who tried to sell our name to freeload off us, shut up”
original post: here
1. ㅋㅋㅋㅋㅋㅋㅋㅋㅋㅋㅋㅋㅋㅋㅋㅋㅋㅋㅋㅋㅋ The fans dug their own grave. Every time there were talks about the army, they would bring those lyrics up while claiming that BTS doesn’t even want to get exempt and that everyone should shut up. They said things like “they said themselves that they would go” and spam everyone with pictures those lyricsㅋㅋㅋㅋㅋㅋ Their stance of swallowing down anything that’s sweet and spitting out anything that’s bitter is rather hilarious (T/N: i.e. being purposely selective).. If only their fans didn’t do all of that, most of the people wouldn’t even know about these lyrics
2. Wow if they really end up not going, it’ll be so embarrassing
3. This was only fueled by their fans ㅋㅋㅋㅋ
4. Just have a safe enlistment
5. If only they really enlisted on due time, this wouldn’t be brought up
6. There’s this too 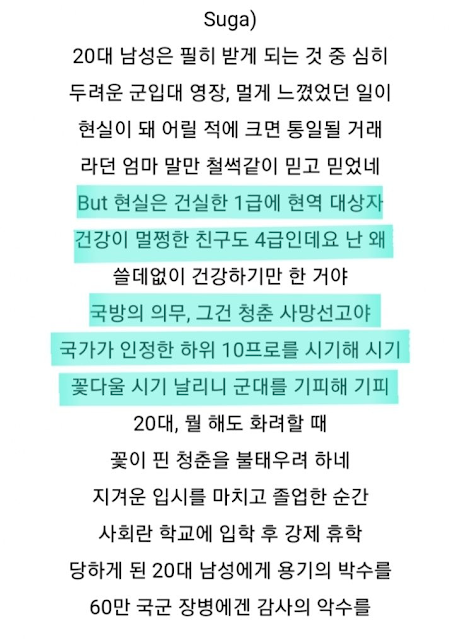 “But the reality is that [I’m] an able-bodied first-rate soldier material
This friend who’s perfectly healthy is a fourth-rate so why am I first-rate
How could I be so uselessly healthy
Civil duties? it’s a juvenile d**h sentence
I envy and envy the nation’s lowest 10%
It blows away this flowery adolescence, I’m evading military service“
6. So dirty, f*ck, just enlist
7. With those lyrics, you shouldn’t not enlist right… just take responsibility and enlist
8. Why are you guys so invested in other people’s lives?ㅋㅋㅋㅋㅋㅋㅋㅋ are you commentors living your lives well?ㅋㅋㅋ
9. Stop procrastinating and just enlist
10. The inferiority complex in the comments are so funny
11. If this is a song written 2 years ago, Bangtan were just minding their own business but there were so many enlistment news one after the other so I can understand that they did this because of the stress. Why use this to drag them? Seeing how Bangtan has been getting hate days after days here, it’s as if they were illegally evading the military or something
12. Honestly, their fans are one of the reasons why this is blowing up
13. But they were the ones saying that they’ll go in due time and because their company is interfering, it’s just hitting them back like a boomerang. Their fans kept bringing those lyrics all the time too
14. The fans are pitiful
15. Just enlist
[naver] “WE WILL GO TO THE MILITARY SO EVERYBODY, SHUT UP” BTS SUGA’S LYRICS

1. [+213, -7]
Suga and Jin already repeatedly said in the past that they would fulfill their duty when time comes so they will just become liars in an embarrassing way. I think that they should just get rid of any pending approval and enlist quickly by the end of the year for the sake of Bangtan’s future
2. [+210, -9]
If he ends up not going by receiving a special treatment while saying that he’ll enlist in due time, it will be legendary ㅋㅋㅋㅋㅋ
3. [+115, -1]
“We want to maintain the current momentum while seeing how far they can grow, and see the end together”, this is the same for other celebrities and non-celebrities too. They also want to attend their 4 years of university and get employed without enlisting. Everyone else is the same
4. [+50, -1]
I don’t care what you said before or what you had in mind. You just have to honestly enlist and have a normal military service
5. [+48, -2]
Who would even want to enlist if they had reasons not to… just cleanly enlisting and increasing your image isn’t bad either. I understand that BTS are impressive but it’s possible that their Korean fans decrease in a country that’s so sensitive about army exemption and it might be a big blow to them too… it would be better to just enlist cleanly
theqoo