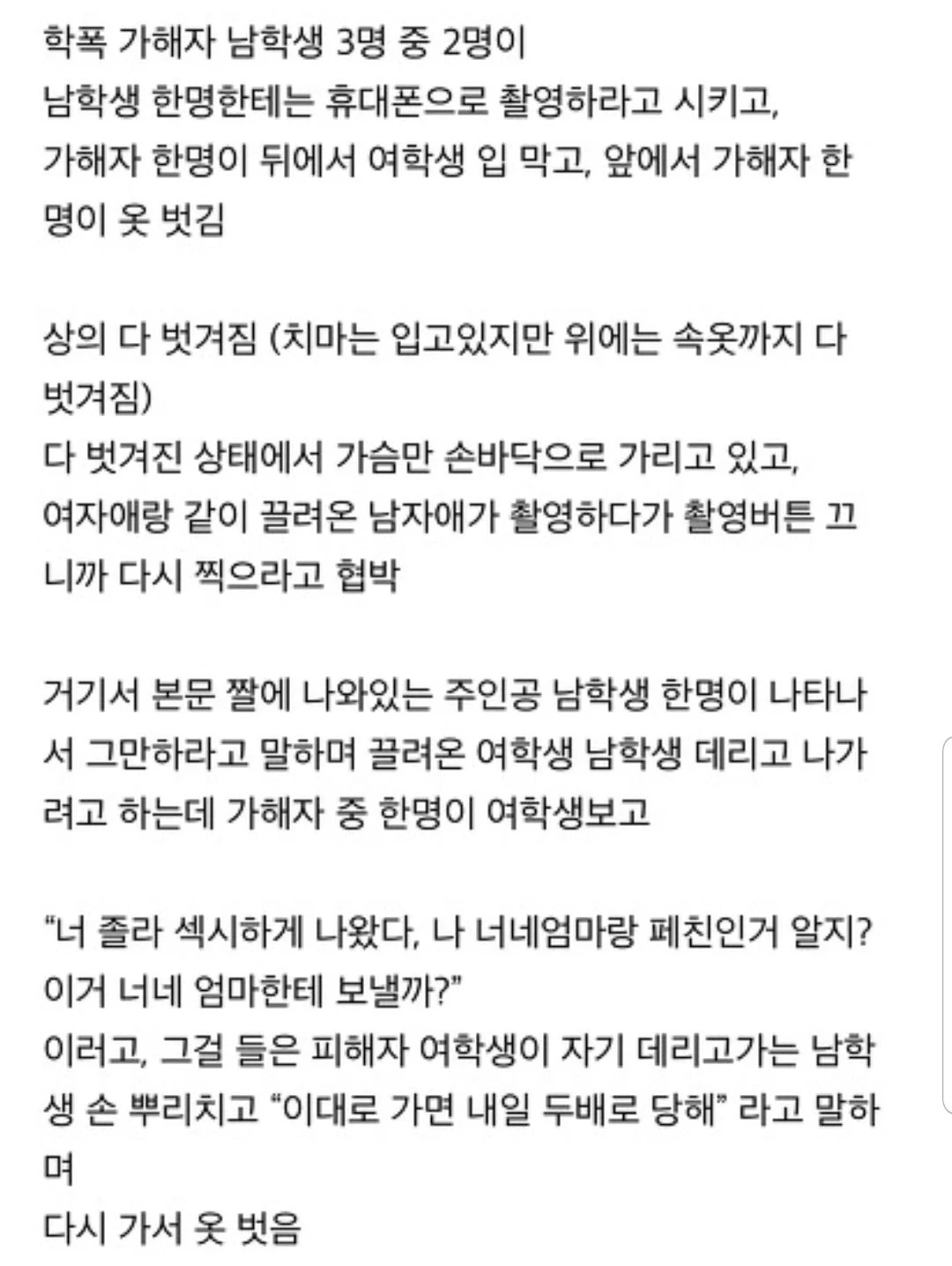 Among the 3 school violence perpetrators, 2 of them made a male student film with his cellphone. One of the perpetrator blocked the female student’s mouth and the other perpetrator removed her clothes.
They removed her top completely (she was still wearing her skirt, but everything down to the underwear were removed)
After removing everything, she was just hiding her breasts with her hands and the male student, who was dragged in this along with the female student, said that as he was filming, he stopped recording and they forced him to shoot it again.
From that moment, one of the male protagonist appeared and told them to stop and tried taking the male student and the female student out, but one of assailant looked at the female student and said
“You came out f*cking sexily [in the video], you know that I’m friends with your mom on Facebook right? Should I send this to your mom?”
and the female student hearing that, shakes off the hand of the male student trying to take her out and says “If I go now, it’ll be twice as bad tomorrow” and went back in and removed her clothes again.
This was a scene that wasn’t present in the original work?
original post: here
1. Can they stop undressing the actors..
2. Does the director have a short d*ck too?
3. I was looking forward to watch it, this is just crossing the line..
4. Even if people claim that this scene was needed, just like another commenter said, they could’ve just filmed the clothes on the ground with them giggling behind their cellphone would’ve been enough..ㅋㅋ I don’t understand why the director insisted to shoot her naked; this is the criticism here
5. People are debating over whether the author is a man or a woman, but filming the scene where they’re lifting her skirt really made me k*ll them
6. I don’t care whether this was the director’s intentions of not, but if this has made people uncomfortable, it should be enough… I don’t like cruel stuff so I wasn’t planning to watch it, but I’ve seen a lot of people being enthusiastic about this
7. That’s right, this wasn’t even in the original work, what is the director trying to do?
8. It was seriously so uncomfortable, why put it?
9. What the? If he sent it to her mom, they should’ve just said they can report to the police
10. Ah seriously are you guys living in a pink world or what? It’s not like they’re trying to glamorize something that’s untrue about our society
[theqoo] FEMALE STUDENT’S NAKED FILMING, WAS THIS SCENE NECESSARY?… “ALL OF US ARE DEAD” S*XUAL ASSAULT PORTRAYAL’S CONTROVERSY 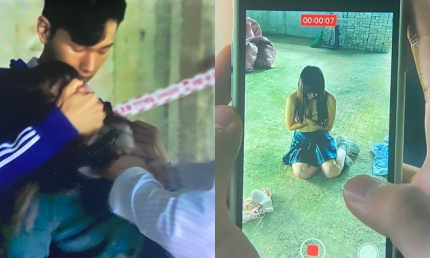 The drama ‘AoUAD’ has been embroiled in a s*x violence controversy from the first episode. Scenes that blatantly depict sexual violence against female students became a problem.
On the 28th, an article was posted on online communities and social media that pointed out the sensationalism of ‘AoUAD’.
[depicting the scene]
There were mixed reactions among viewers about this scene. Along with the opinion that it is necessary to respect creative freedom, criticism was raised that showing this kind of criminal methods and cruelty was no different from p*rnography.
Moreover, the victim in the drama is a minor. In response, some viewers criticized the s*xual objectification of minors.
Some critics were also raised about dramatizing a scene that was not in the original work. ‘AoUAD’ is based on a webtoon of the same name. One netizen said, “I do not know the intention of the director for including this scene.” “If the purpose is to show the brutality of school violence and s*xual violence, it is wrong.
source: https://n.news.naver.com/entertain/article/008/0004702504
original post: here
1. It would’ve been just as uncomfortable as adults, but setting up a student.. It’s just oba
2. Is the director a man?
3. This is seriously misogynistic, why are they forcing the scene in? I’m seriously pissed
4. Seriously this felt like a troll scene. I don’t understand why they had to include it, especially the female student who tried to give birth in the washroom
5. It’s clear that the person who made the drama is only viewing it with the male gaze
6. Netflix’s misogyny is seriously sever. Just cancel it
7. This is dirty, they added something that wasn’t even in the original work. I can straight up tell what kind of person the director is
8. Even the article’s picture is disgusting. This is just glamorizing the perpetrator’s gaze on the victim
9. I don’t understand the directing behind the victim’s actions, it’s just uncomfortable
10. This was f*cking unnecessary. Showing male students fight to solve the problem and the female student crying and hiding behind them was so annoying. And also the one sided love with the male student who was filming. You can tell what kind of person the director is
NETFLIX, theqoo