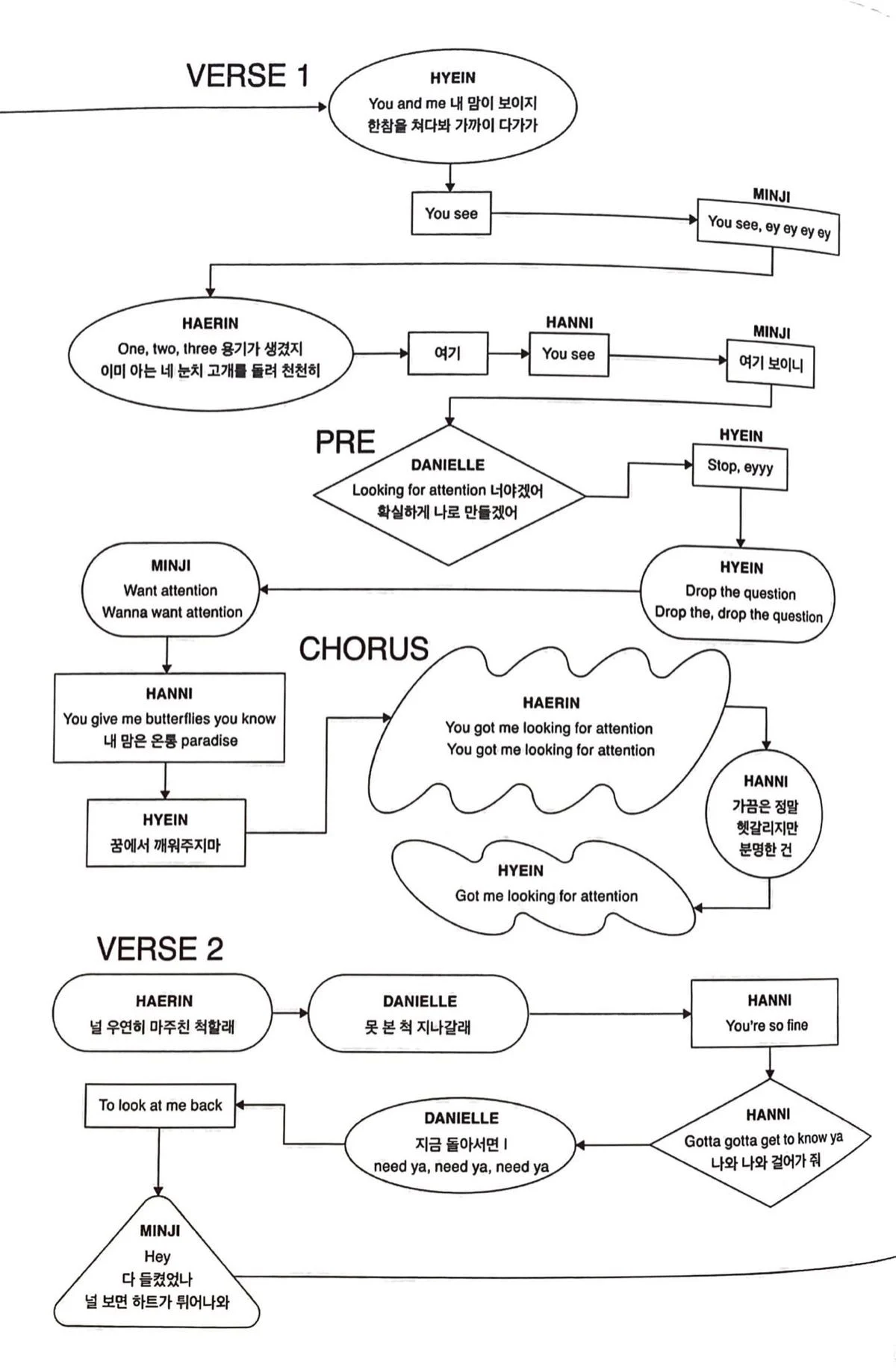 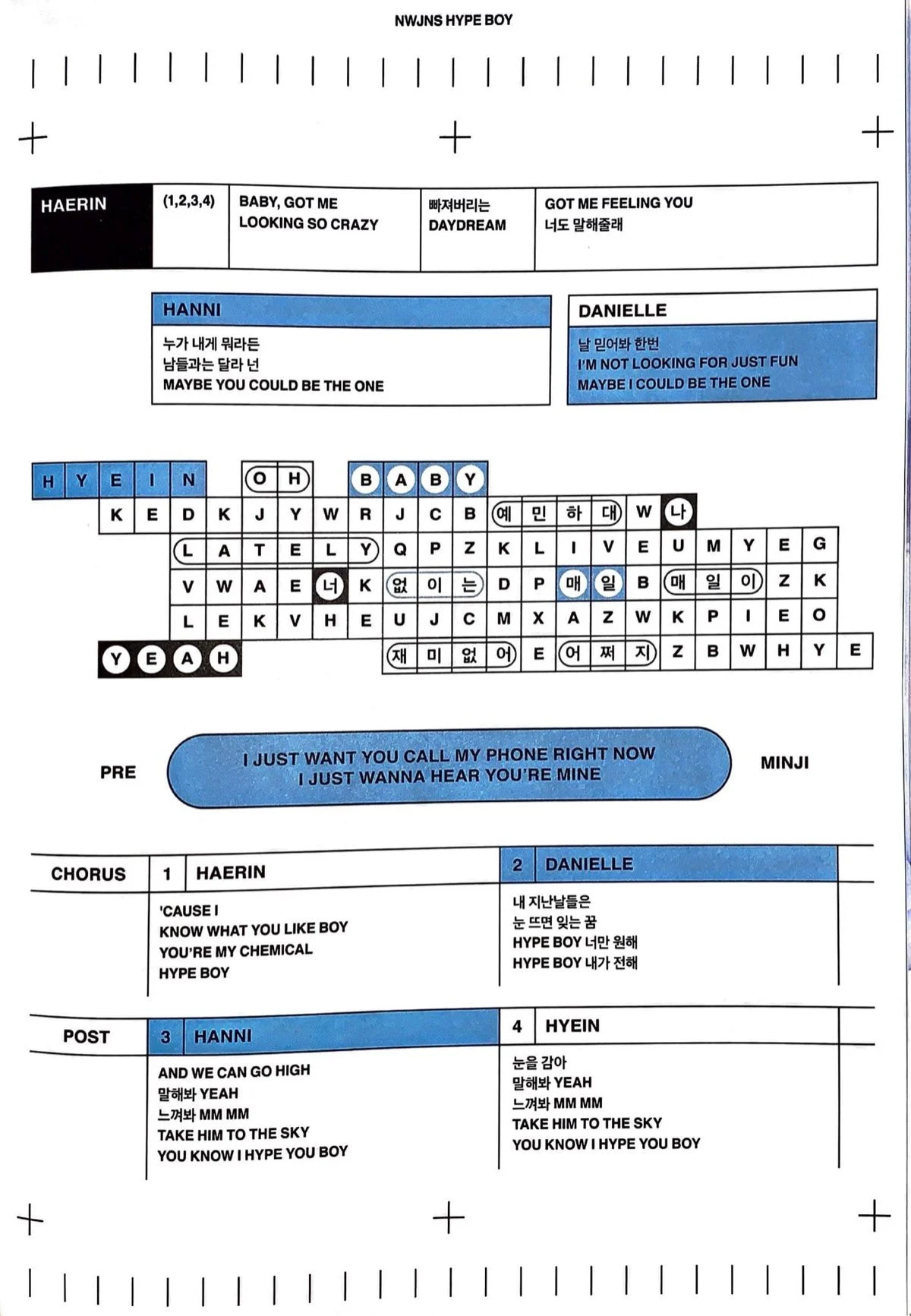 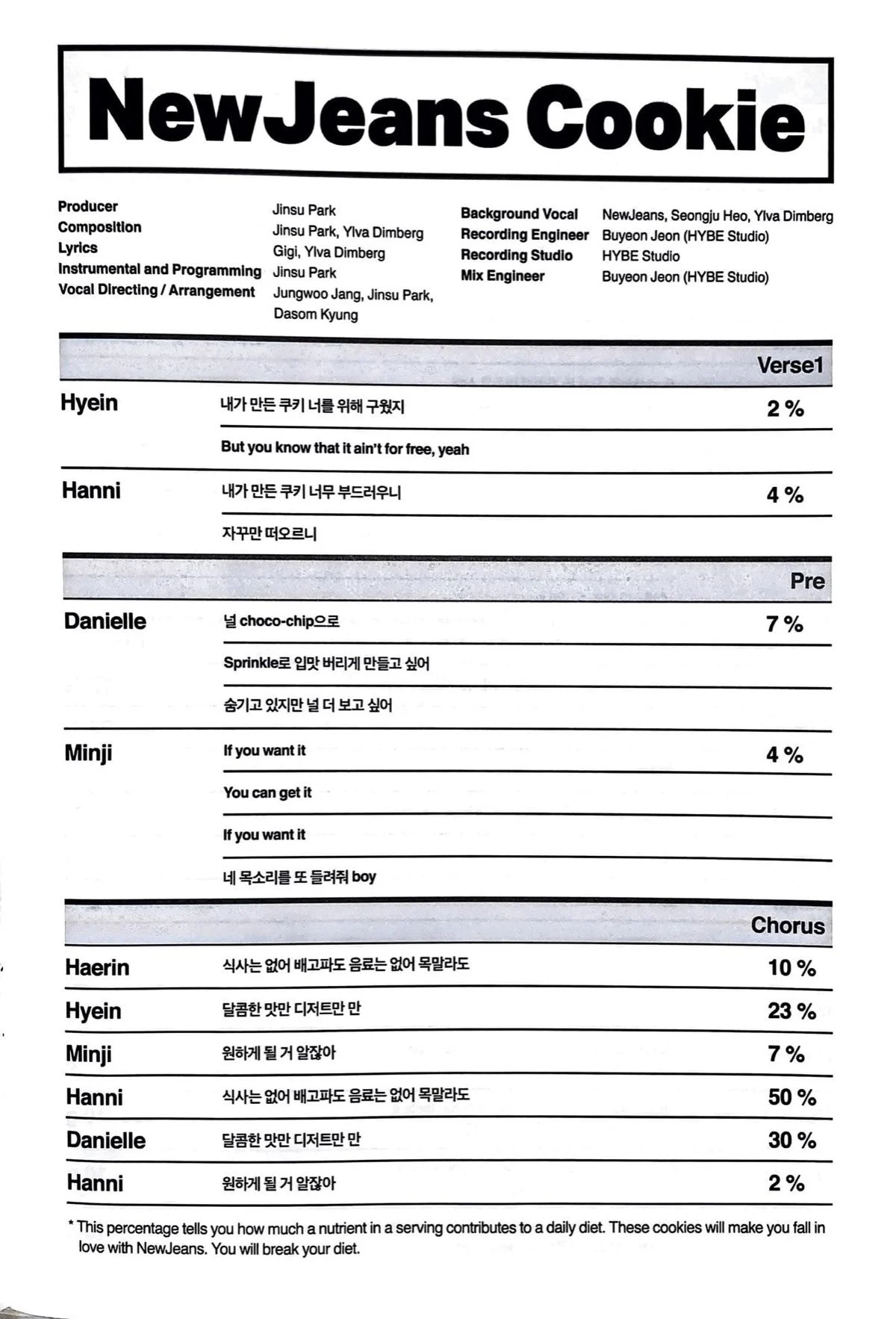 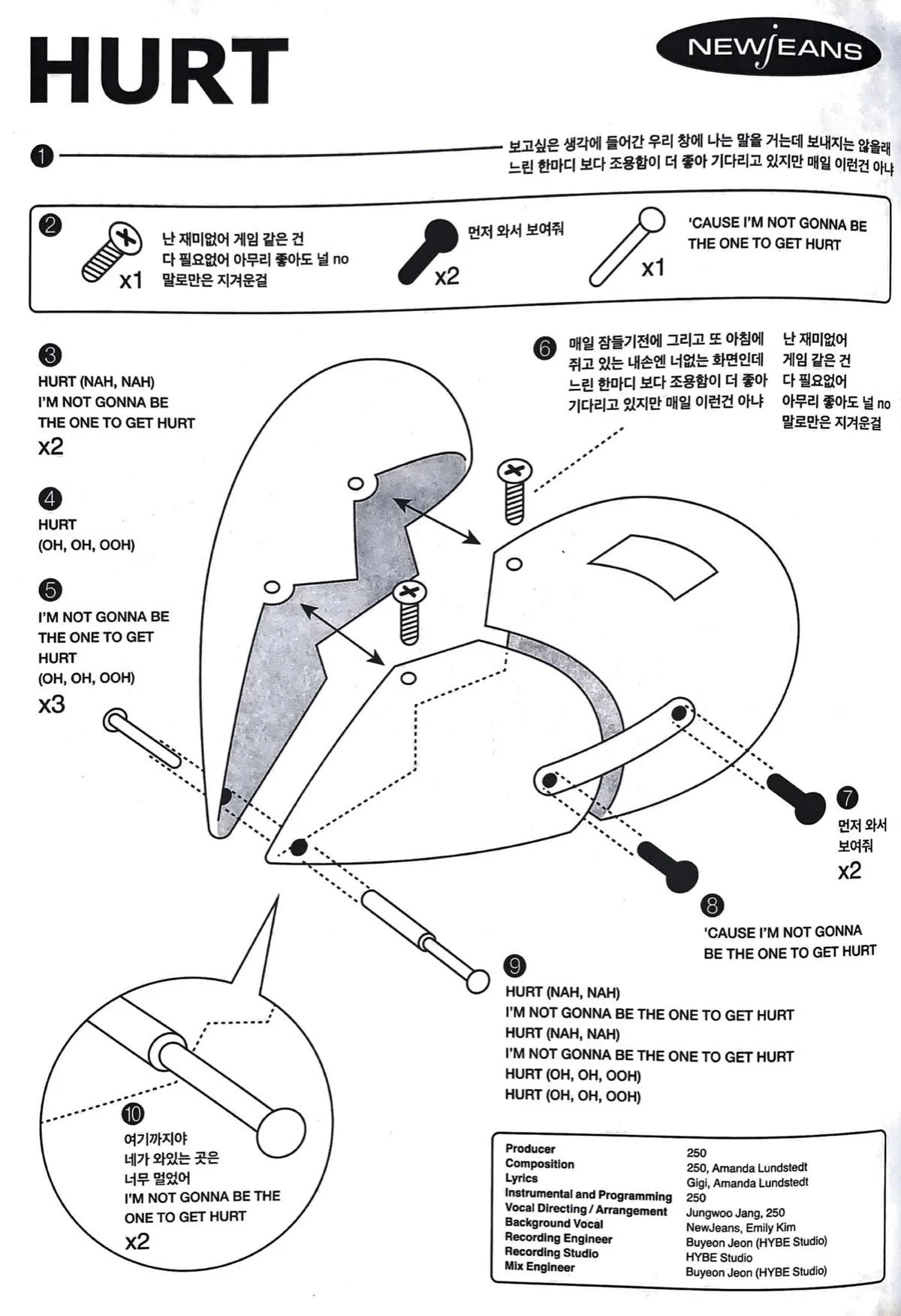 original post: here
1. Hurt is daebak
2. Legendary…
3. This is insaneㅋㅋㅋㅋ Daebak
4. It’s so impressive…
5. Wow it’s seriously so stimulating
6. Daebak, the planning for this is seriously something
7. Wow it’s my first time hearing about Min Heejin, but her creativity is seriously another level
8. A genius, a genius…
9. I’m curious, I want to buy an album oto
10. Hurt is so impressive
[theqoo] HYBE’S REACTION TO NEWJEANS’ DIGITAL RELEASE 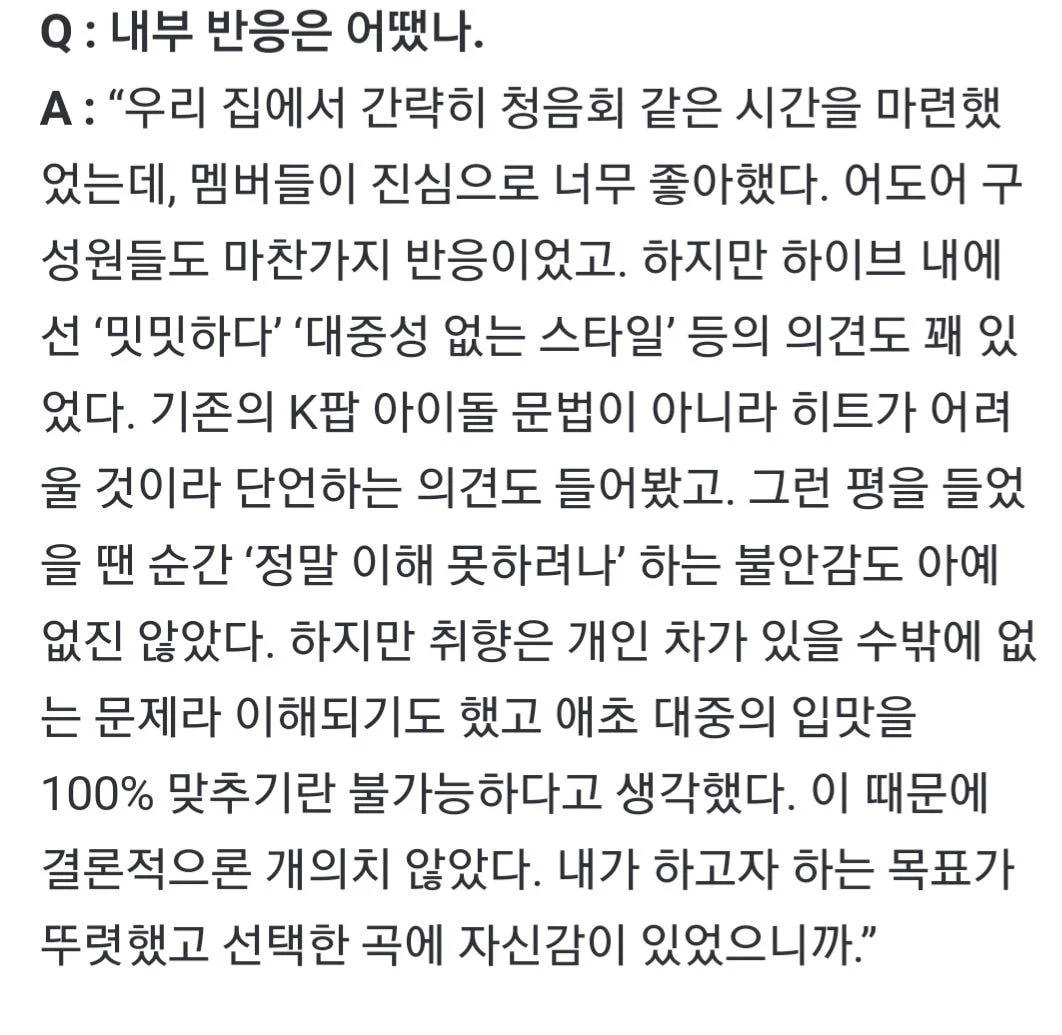 Q: How was the internal reaction?
A : “We had a brief hearing session at our place. The members really liked it. The staffs of ADOR also reacted the same way. However, there were quite a few opinions within Hybe such as the song (Attention) was ‘flat’ and it ‘doesn’t sound public-friendly’. I also heard opinions that assert that it will be difficult to hit big for them, that they’re not the traditional Kpop idol material. When I heard such a review, I thought to myself ‘Are they really not going to understand?’. However, they ultimately understood that taste is a matter of individual differences, and I already knew that from the beginning, it would be impossible to satisfy 100% of the public. So in the end, I didn’t care. Because I had a clear goal in mind and I had confidence in the song I chose.”
original post: here
1. It’s amazing to see that Min Heejin still pushed those songs through. No matter how they insist the songs are boring, there’s a reason it hit #1
2. Attention is the song that stuck to my head the most. But in terms of the general public’s taste, Hype Boy had the most response. And this makes me realize that Hybe is way more involved in this than I thought? Anyways, Attention was my favorite song from their pre-debut release, so I’m happy to see it do well
3. It’s true that Hype Boy is a better song though
4. It may sound more flat than Hype Boy but it really sounds refreshing when you listen to this song among all the loud songs released lately
5. I can understand why they thought it was flatㅇㅇ But this is also why it clicked
6. It’s because it’s not a music style that is trendy nowadays that people enjoy it no? This song has its own genre
7. The moment I listened to it, I already felt like the impact would be intense thouhg?
8. No but Hybe’s songs were always intended to be public-friendly. The fact that their male idols songs are becoming more and more of a ‘minor’ type (although I like it) is probably done on purpose by Hybe, do you think that Hybe only has one or 2 representatives?
9. People are not listening to them because it’s Hybe, they’re listening because it’s Min Heejin
10. Honestly, it’s because it’s a Hybe group and it’s a Min Heejin group that people are listening to it. If you’re giving this song to a completely new rookie group, it’ll be hard for them to do well with it
theqoo