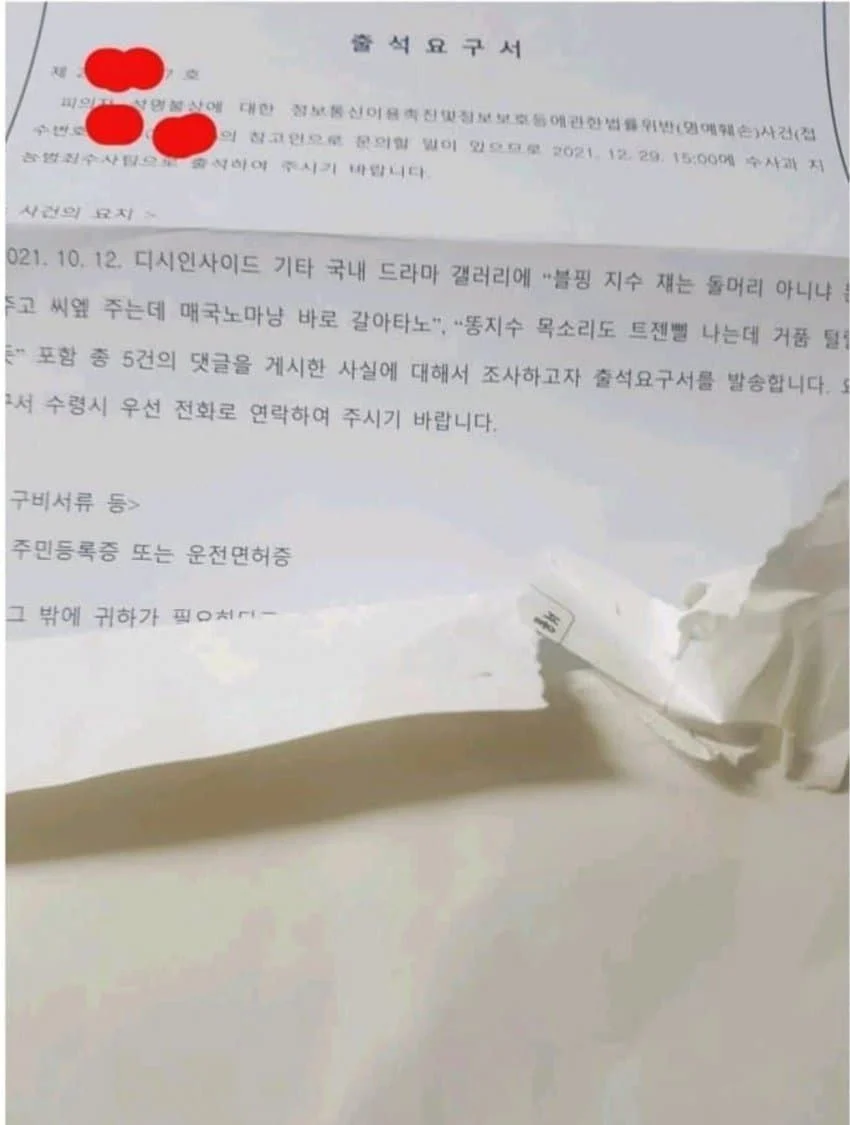 On the form, you can see they made comments like: sh*t Jisoo, her voice sounds like a transgender person, her bubble will burst etc.
In total, they will be investigating OP for 5 things she wrote.

Title: It seems like I received a lawsuit because of a celebrity, but I have a question.

When I came home, it seems like the police station sent me some documents…
1. I’m not sure if [the comment] was written using phone IP or house IP, I think it might’ve been written using phone IP, will the prosecution be suspended if I say I didn’t [use my phone data] during the investigation?
2. I haven’t written anything harsher than the comments above.
If I was fined, how much do you think I’d have to pay?
It’s my first offence.
comments: (t/n: OP’s ID is 223.62. Every time the number shows, OP is answering. We’ll name the other users ABCD and so forth)
A: Celebrities use professional lawyers for this so it’ll be hard to get rid of them. I think I’ll pay between 100~400.
>>A: Why didn’t you erase your [hate] comments?
>>OP: I erased my comments and came here
>>A: If you erased your comments, how are you getting sued?
>>A: Is this the power that celebrities have? wow
>>B: If a law firm is with them, then the words would be different
>>C: If it’s Kim&Chang, the words would be different… (T/n: law firm name)
D: That’s why you should live kindly
E: Looking at Sung Sikyung’s mass scale lawsuit, he only started contacting people 2 years after [their hate comments] but this person got contacted only 2 months after? wow. Mass scale lawsuit usually take 6 months and if they’re delayed, it can take up to 2 years wow wow
F: They didn’t call you first and straight up sent you a document?
G: Wow they can still catch you even if you deleted the comments? That’s freaking scary
H: What the? If you didn’t use your real name, then shouldn’t they be unable to define who you are?
I: Look at this. I looked for a lawsuit notice. Yah f*ck, you’re totally f*cked? [link] If you look at the link, it says they would file a civil complaint such as obstruction of business, but after the crime, they even filed a lawsuit for damages. It’s going to be a f*cking headache
>> J: Hmm… However, if it’s a simple insult, they will be sued with defamation. And it’s possible that it ends with just the insult. However, if the comment is deemed to have malicious intent and they have incited huge communities to the point it ruins sales, then it would be considered obstruction to business no?
>> K: You 2 seem to know a lot about laws, can you read the forensics of the post above and answer me?
This was posted in the “lawsuit” gallery. (t/n: there are different galleries on DC just line r/ on reddit)
So apparently DC is able to trace your phone IP even after you’ve removed your comments.
For those who are confused, the OP claims they wrote their comment on Theqoo and erased it and is posting the aftermath of her lawsuit on DC gallery
They released their lawsuit in September, and but it’s only been 2 months.
original post: here
1. Wow…. I’ve seen everything, they’re even going as far as faking lawsuits….. This f*cking hilarious….. Fangirling life is really doomedㅋㅋ
2. I was wondering where on Earth would you find lawyers who can act this quickly, but you’re telling me this is fake?
3. Wow goosebumpsㅋㅋ
4. You’re telling me they wouldn’t do anything when they see the usual comments like “BlackPink🤮” but when it’s comment calling our BlackPink Jisoo for acting in a drama that glorifies the NSA and that it’s considered secondary assault to the victims, now they consider it hate speech against Blackpink?ㅋㅋ I’ve seen fans fake something, but they’re really here faking everything.
5. But who ever got sued on Theqoo?
Theqoo doesn’t even differentiate between house IP and phone IP, and they claim they got sued on Theqoo? This makes 0 senseㅋㅋ
Me too I’ve dropped a few PDFs in those lawsuit galleries before so I know how they work, you can’t get sued from comments on Theqoo
6. Faking a lawsuit???? Isn’t this a crime???
7. This is so fakeㅋㅋㅋㅋㅋㅋㅋㅋㅋㅋㅋ It would be so hard to file a lawsuit this fast and you’re telling me they were able to sue someone who wrote, then deleted their comments and are able to even differentiate phone IP? I’ve fangirled on YG idols and they’ve never acted this quickly
8. This is fabricated right? If this is really fake, you can really tell Jisoo’s fans have gone crazy
9. Wow imagine faking a lawsuit for an idol. What an amazing fandom
10. They can’t swear at other people so now they’re swearing at their own bias, what the? ㅠㅠ Even the alleged swearing they wrote towards Jisoo was so harsh, they should be the ones to really get sued by Jisoo
[theqoo] BLACKPINK GALLERY CLAIMS THAT THEY WEREN’T THE ONES WHO CALLED MARTYR LEE HANYEOL MEMORIAL FOUNDATION 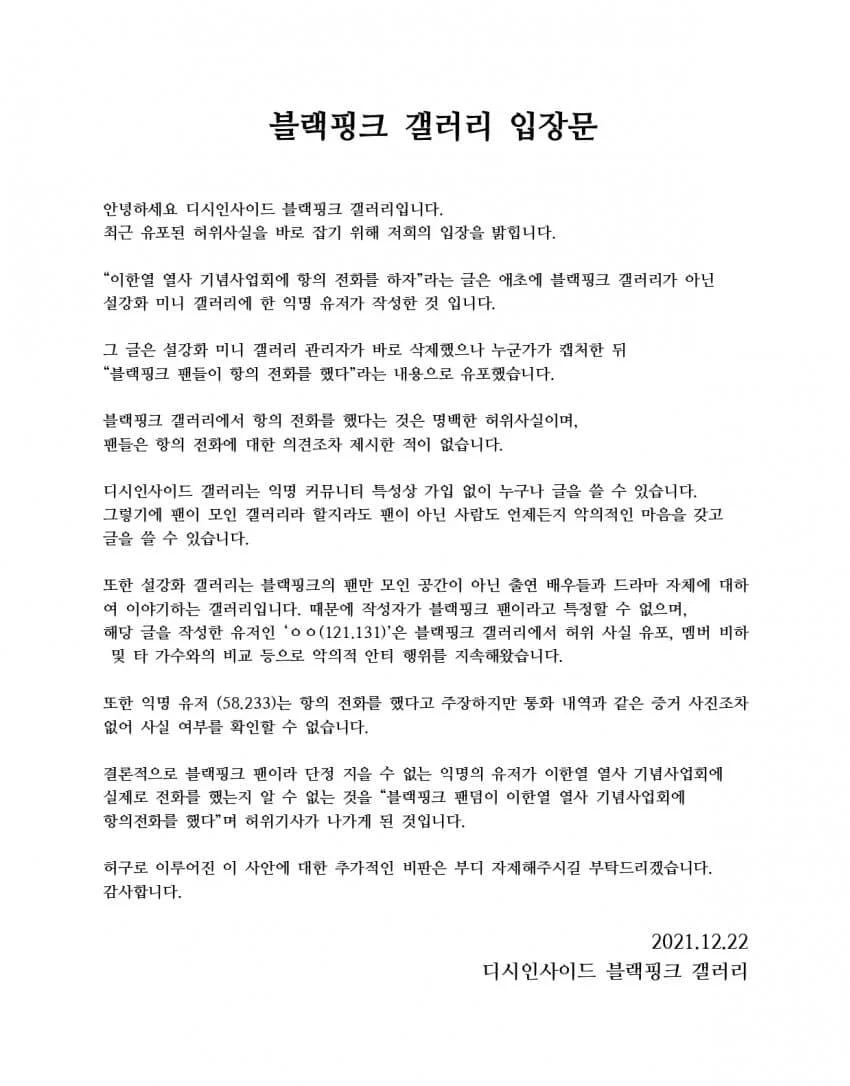 Hi, this is BLACKPINK DC Inside Gallery.

We would like to present our stance regarding the spreading of false information recently.
The article “Let’s call the Lee Hanyeol memorial foundation” was not written by the BP gallery, but an user from the Snowdrop mini gallery.
The article was immediately taken down by the Snowdrop gallery but before anyone could have time to capture it, people have already started spreading the fact that BP gallery was the one who made it.
BP gallery making complaint calls is a clear spreading of false information.
The fans have never expressed their intention to make any complaint calls.
Due to the anonymous nature of DC Gallery, anyone can post anything.
Therefore, although this gallery is a place where fans gather, people who aren’t fans and have malicious intent can also come and write anytime.
Furthermore, Snowdrop gallery isn’t a place with only BP fans, it’s a place where they discuss about other actors and the drama itself too. Therefore, we’re unable to say that it was definitely a BP fan. The user oo121.131 who wrote the article, has always participated in spreading rumors and hate towards the members in the BP gallery.
The anonymous user 58.233 who claimed they have made a complaint call. But we cannot confirm because we don’t have their call logs or pictures.
In conclusion, we cannot confirm that the anonymous user who called Lee Hanyeol Memorial foundation was a BP fan and saying “The BP fandom has made complaint calls to Lee Hanyeol Memorial foundation” is false information.
Please refrain from creating further grievances about this fictional issue.
Thank you.
original post: here
1. If you guys were really her fans, then go use your strength to stop what her I-roaches have been doing. I don’t see you guys doing any of that?
2. Isn’t it easy to just ask that person his phone call logs then?ㅋㅋ But you didn’t? And you’re also lying about it…? Think about this
3. You don’t enjoy having the truth distorted, yet you support a drama supporting the truth being distorted?
4. It’s funny that they think they can end this with just a statement
5. So you’re telling me all those people were “trolls”?

“I want to call those people everyday and tell them they misunderstood”
“Why are they mentioning 5.18 randomly???”
“They should watch the drama properly”
“Just delete your post and ignore them”
“I just called Lee Hanyeol’s memorial foundation. I asked them why did they even bring out the glorification of Nazis and that they never mentioned that a North Korean spy would meddle with the democratization protest, I told them to go watch it then we can talk… They said :ok we’ll validate”
“F*cking speechlessㅋㅋㅋㅋㅋ They didn’t even watch the drama”
“We need to let them know the actual content of the drama”

6. They didn’t provide us any proofs and they’re just posting a article like that. What a sight.

7. They claim it wasn’t a fan, but we all know that this gallery is the one who incited everyone to act. F*cking hilairousㅋㅋㅋㅋㅋ Instead of releasing this kind of post, why won’t you release a post defending the drama about the accusation it has against your fandom who is refuting any historical distortion? It’s not too late to release a statement
8. Now you get a taste of what it feels to be a victim of distortions?ㅋㅋㅋㅋㅋㅋㅋ
9. They don’t care when they’re committing secondary assault with history distortion, but they feel it’s unfair when people spread false information about them?
But it’s all a misunderstanding~
10. They can’t even hold back when they feel like they’re the victims of a misunderstanding, but they’re not doing anything in the face of history distortion?
[theqoo] LEE HANYEOL MEMORIAL FOUNDATION’S SIDE “BLACKPINK’S FANDOM COMPLAINT CALLS? WE RECEIVED THEM BUT…” [OFFICIAL STATEMENT] 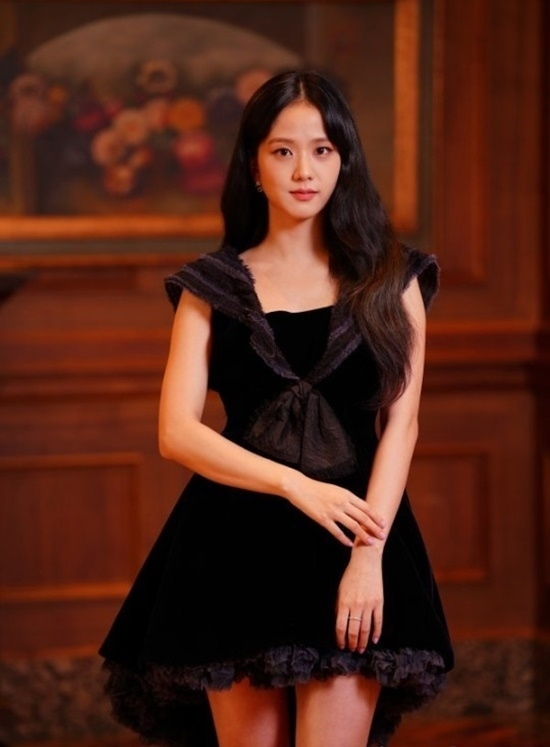 Amidst allegations that the group Blackpink fans made phone calls to the Lee Hanyeol Memorial Foundation, which criticized Jisoo’s drama Snowdrop, the Lee Han-yeol Memorial Foundation spoke up.
[…] Lee Han-yeol Commemorative Association told Xports News on the 22nd, “It is true that the call came from a small number of people,” and explained it was not from a collective action.. However, although a small number of actions have been confirmed, it is impossible to identify those who have called to protest as Blackpink fans.
[…]
source: https://entertain.v.daum.net/v/20211222121146588
original post: here
1. Whether it’s this gallery or the other gallery, they’re one and the same. BP gallery was the one who released the post (inciting them to call Lee Hanyeol foundation) first and deleted, then Snowdrop gallery released the post. They’re just trying to clean behind them
2. It could be non-fans calling them, just like it can equally likely that it was a fan? Whether it’s the male lead fans or the female lead fans, it’s one or the other.
3. Who would call them if you’re not an empty brain yourself?ㅋㅋㅋㅋㅋㅋㅋㅋㅋ
4. It’s either the BP fans or the Jung Haein fans, who else have lost their minds aside from them?ㅋㅋ
5. But they did receive callsㅋㅋㅋㅋㅋ F*ck
6. You did call~~~~~ You f*ckers~~
7. But they did receive callsㅋㅋ seriously this gives me goosebumps
8. Those r*tards really called them???ㅋㅋ Wow
9. So the Ilbe BP fans did call
10. It’s the ilbe bugs
[theqoo] BLACKPINK FANS ATTACKING AN ACCOUNT EXPLAINING THE ISSUES WITH SNOWDROP IN ENGLISH

Fucker let me tell you what the NSA did to scores of innocent people#snowdrop #설강화 pic.twitter.com/EqKCnjDPIj

She explained what Snowdrop was about.
She has a lot of tweets about what’s problematic about Snowdrop
But a portion of the Blackpink fans found her unpleasant so they are now attacking the account with the account owner
They are saying “you’re so nitty picky about Snowdrop ㅋ”
or “stop being so obsessed with us” 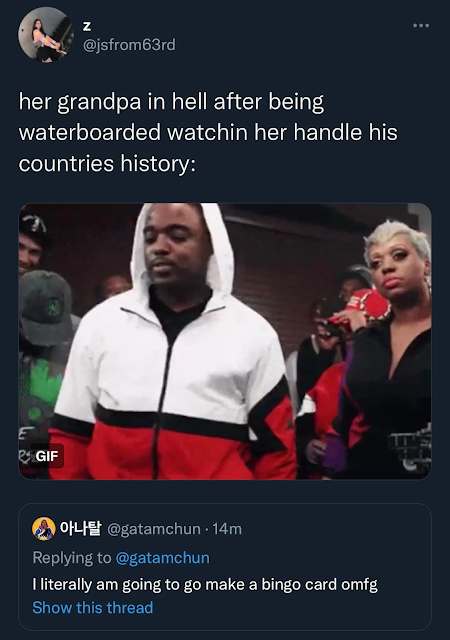 They are even insulting her family
The BP fans are flocking into her account and she’s still getting attacked
original post: here
1. You f*ckers, your singer will sow what you guys are reaping
2. I never had any ill feelings towards BP before but their image sure changed with this incident

4. Disgusting; Didn’t i-roaches also start a national petition and filed complaints to the Lee Han-yeol’s Memorial Foundation?~ They even made posts with false facts~ They are causing so much trouble~
5. I-roaches are hopeless. I used to like Blackpink songs too ^_ㅠ farewell
6. Because of their fans, their image has gone in the drainㅋㅋㅋㅋㅋ They are just f*cking dumb and should’ve just stayed stillㅋㅋㅋㅋ
7. Like singer like fans… they are now becoming repulsive
8. Blackpink’s i-roaches are hopeless🤮🤮🤮🤮
9. Both of YG’s male and female idols are making colossal f*ck ups
10. I can trust in skipping BP now. The level of their fans is just too detestable