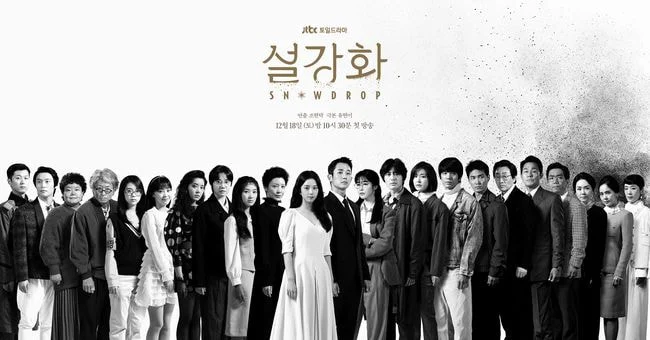 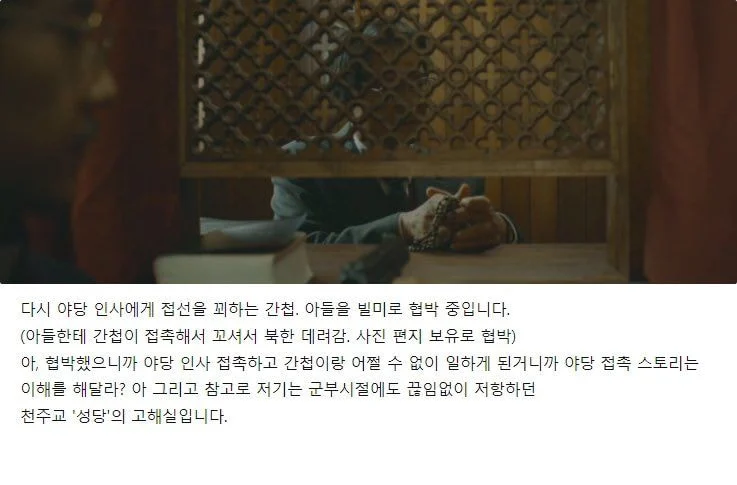 (t/n: context: Su-ho called the South Korean opposition member and told him that his son contacted him, and he brought his son to North Korea, showing him pictures of his son at Pyongyang. He also says that his son wrote him a letter and that he misses him a lot. Opposition member = opposition to dictatorship/military regime)
Ah, so you’re telling me, because he’s getting threatened, he had to call the member of the opposition party to end up cooperating with the spy, so we’re supposed to buy this whole opposition party story? Ah and for reference, this spot is the confession room of a Catholic Church, a place that was constantly resisting the army during the pro-democracy movement.
The spy contacts him through a Catholic church
No but are they really going to portray the Catholic church, which was a sacred place supporting the pro-democracy movement as a spot to meet spies?? Are they crazy?
(t/n: The church was a place that sheltered students and protesters during the pro-democracy movement, so to introduce a NK spy in the church once again legitimizes the NSA excuse that protesters = NK spies, also belittles the role of the church during pro-democracy movement.)
And what’s even more twisted about it is that
They portrayed a professor of the Hankuk University who is also a Catholic,
who has a contact who is a North Korean spy and met him at a cathedral
I’m asking you, what were you trying to imply with that scene?
This is the Professor Choi Jonggil’s mysterious death case
(t/n: From Namuwiki, he was a law professor from SNU. He was caught demonstrating against Park Chunghee regime and was caught by the KCIA(old NSA) and they declared he committed suicide after admitting he was a spy for Europeans. However, the bereaved family, the Catholic Church, and several professors who studied with him abroad, all insisted that he was tortured and killed. In 2002, they reopened his investigation and found that the KCIA thrown him from a seventh story window during their interrogation; he is also believed to have been tortured. Gov ordered 184 million won compensation.
Knets is comparing both cases showing how in the drama, professor from a South Korean university who is a member of the opposition party got framed as a spy, but here they’re showing that it’s because a NK spy was threatening him with his son, so he had no choice but to cooperate, again pushing the NK spy agenda and legitimizing NSA.)
He was a professor from the SNU who helped the democratization movement and was taken by the KCIA.
(of course, he was accused of being a spy^^)
He was tortured, but they disguised it under suicide
At that time, the KCIA said that professor Choi Jonggil confessed to being a spy for the Europeans during interrogation and committed suicide after thatㅋㅋㅋㅋ
This person was also a Catholic
They sure are sly aren’t they?
Taking a case where university professor who helped the democratization movement, and who got killed by being framed as a spy,
and looking at the drama, where an university teacher goes directly himself to meet with a North Korean spy…………..
And turning the one who threatened him, not as the NSA, but as a North Korean spy^^
original post: here
1. Are they going to twist all of the big incidents that happened at that time and distort them? The writer is seriously the devil
2. The way they’re trying to be sly with this is simply disgusting and people who are shielding this also disgusting.
I’m so disgusted by them that even swearing at them won’t make me feel refreshed…I just want to strike them on the head…
I’m feeling as nauseating as when I look at sexual offenders… This is the same thing..
They have no consideration towards the people they’re attacking
And to the people who are still asking where is the problem with the drama
I hope you get the karma back
3. The writer’s creativity is so lacking so she had to borrow other people’s stories? Or does she not research anything before writing?
4. This is disgusting
5. They’re seriously devils
6. A drama praised by ilbe is a crazy drama to start with
7. If you watched the episode of “The Story of That Day Biting the Tail”, they addressed this story. The professor’s dongsaeng is a member of the KCIA, but he was still beaten to death..
8. Is the writer coming after the church????????? She’s being very transparent ^^
9. Ever since they called the lead Youngcho, you knew they were just mocking it
10. What was the intention behind this writer’s head when she wrote this drama exactly…?