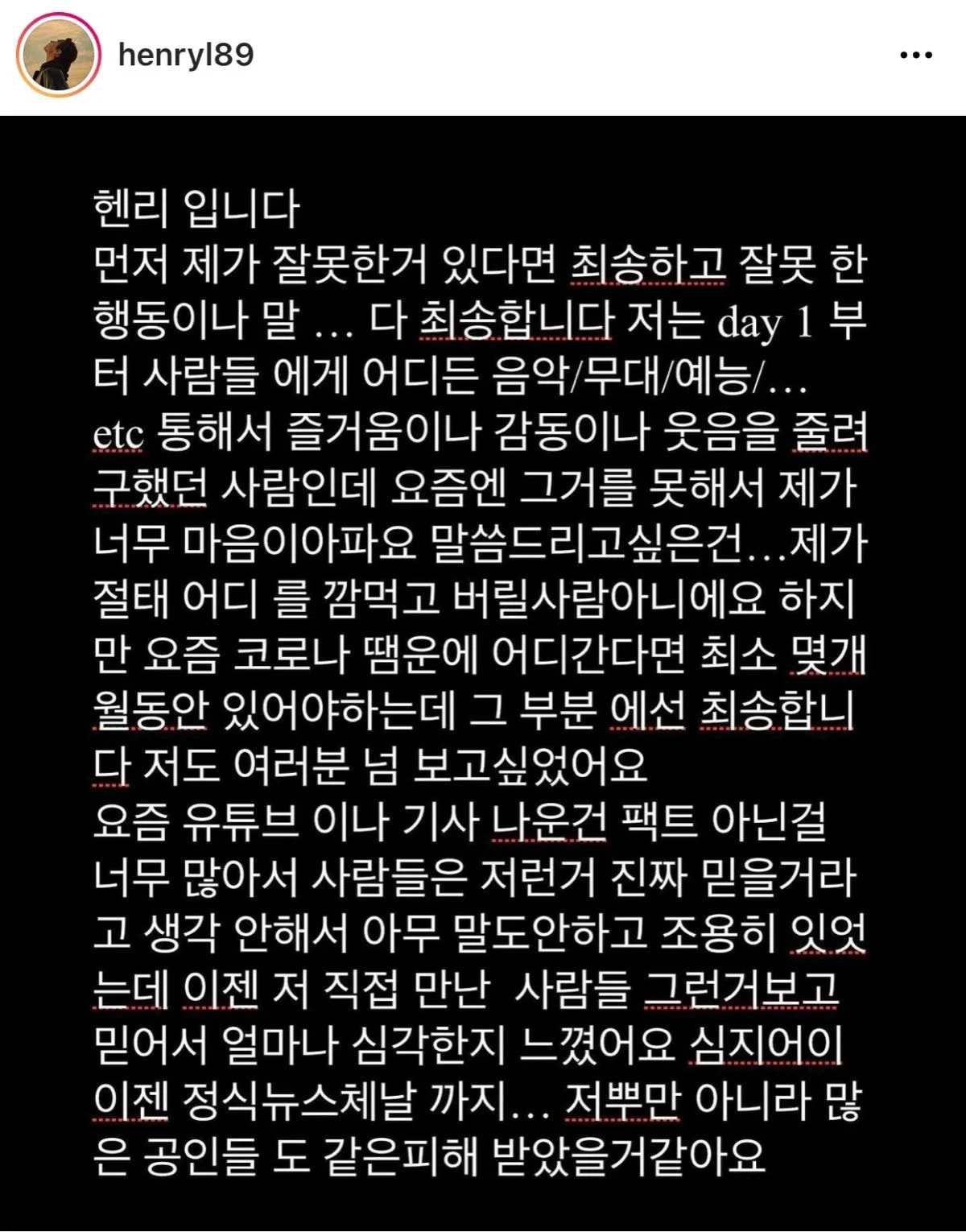 “This is Henry. First of all, I’m sorry if I did anything wrong including my actions and words. Since day 1, I always wanted to give laughter or happy emotions wherever I appear but I’m hurt that I couldn’t do that these days. The point is…I’m not the person who will abandon something, forgetting about it. But due to the pandemic, I have to stay at least a few months if I go somewhere so I’m sorry about that. I miss you all so much.

I have been staying quiet as I thought not many people will believe because online is riddled with fake news. But I realized how grave the situation was after people who met me in person believed it and now the major news channel…The most hurtful part is that many are uncomfortable not because of my actions or words, but because of my bloodline.
I just wanted to make people happy but I don’t know what to do if there are people who are upset because of my bloodline. I’m sorry to my fans for not keeping my promise that I’d always share good news and appear in my best self. I’m so sorry.”
CR: Allkpop
(T/N: Summary of his typos (not counting his spacing mistakes):
– 최송 instead of 죄송
– 줄려구했던 instead of 주려고 했던
– 절태 instead of 절대
– 깜먹고  instead of 까먹고
– 땜운에 instead 때문에 (T/N: but later, he got the spelling right)
– 몆게 instead of 몇개
– 유튜브 이나 instead of 유튜브나
– 나운건 instead of 나온건
– 잇엇는데 instead of 있었는데 (T/N: this might be a slang typo since some people who are lazy type it this way)
– 심지어 이이젠 instead of 심지어 이젠
– 뉴스체널 instead of 뉴스채널
– 알개된건 instead of 알게된건
– 마냑 instead of 만약
– 잇다면 instead of 있다면 (T/N: same as above, might be counted as lazy typing)
– 몰으겠어요 instead of 모르겠어요
– 햇지만 instead of 했지만 (T/N: same as above, might be counted as lazy typing)
Most of his mistakes are very elementary)
And this is the situation of the Mapo Police’s dashboard (T/N: Henry was recently appointed as the school violence prevention ambassador (see here)) 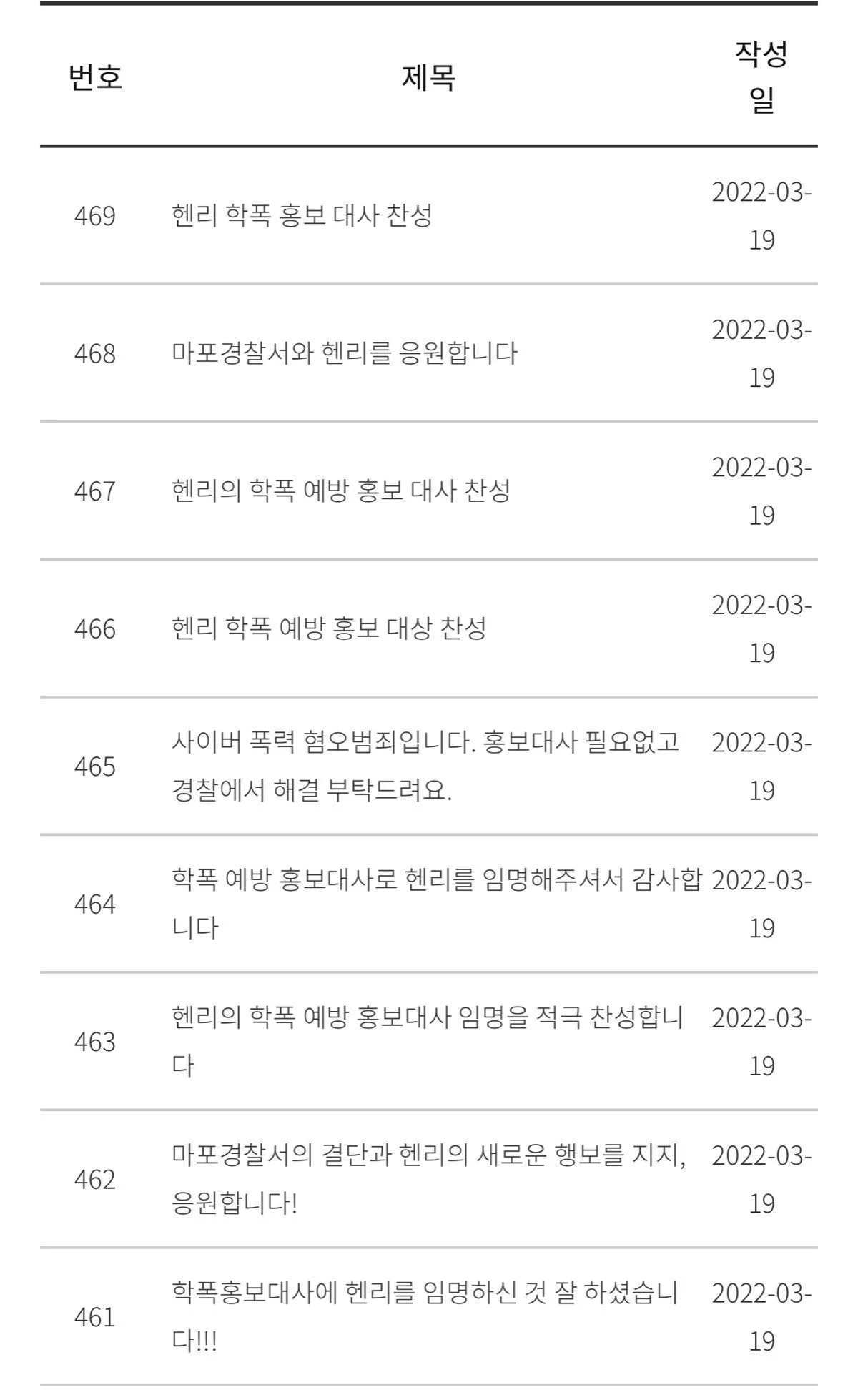 (The posts are people who are agreeing with Henry being appointed as the school violence prevention ambassador in Mapo-gu)
original post: here
1. Look at his “I’m Ssory” ㅋㅋㅋㅋㅋㅋㅋㅋㅋㅋㅋㅋㅋㅋ (T/N: he wrote 최송 instead of 죄송) He started to earn money from his Suju activities at least starting from 2007… what’s up with the typos?? I can’t think of anything else than this being on purpose
2. How does the Mapo-gu police feel for getting support from China?ㅎ
3. He’s making these typos on purposeㅋㅋㅋㅋㅋㅋㅋㅋㅋㅋㅋ
4. You can see how racist he is towards Koreans from this postㅋㅋㅋ
5. (T/N: this comment is in English) Hi Henry. You are Canadian and barely spent any time in China, and you are Taiwanese-Hongkongese by blood so there is no excuse for your behaviour in supporting the CCP and its abominable policies. Let us ask you this: what is your opinion on the Uyghur genocide? What is your opinion on the Tiananmen massacre? Can’t answer? This is the problem. You are so blinded by money that you’ll contribute to the CCP and their wildly harmful propaganda, while you enjoy your democratic rights as a Canadian citizen. Please don’t pretend it’s your “blood” that’s the issue. You know Alysa Liu, the Chinese-American skater? She freely speaks out against the CCP so we all love her even though her “blood” is actually Chinese unlike yours, which is Taiwanese-Hongkongese. What you’re doing is vile and I hope to God that you know deep inside what a moral and ethical crime you are committing. Goodbye Henry. I hope you can find it within yourself to try to become a better person.
6. “Ssorry”ㅋㅋㅋㅋㅋㅋ is he joking?
7. Blood? What is he saying? He doesn’t even have any relation to China
8. It’s not because of your bloodline but because of your mindset…
9. He’s for sure making these typos on purposeㅋㅋㅋ wow so hopeless… he’s talking about his blood but he’s more cosplaying as a victim (T/N: blood = 피, victim cosplay = 피코). He’s despicable
10. More like victim cosplay
11. What blood?ㅋㅋㅋㅋㅋㅋㅋㅋㅋㅋㅋㅋㅋㅋㅋㅋㅋㅋ
12. I know that he’s good in Korean so why is he doing this?ㅋㅋㅋ that’s how he’s writing his apology?ㅋㅋㅋㅋ
[teens stories] HENRY RELEASED AN APOLOGY
post response:
[+283][-14]
original post: here
1. [+271, -4]
If you look at his whereabouts recently, you’d think he would never return to Korea, isn’t he giving up on earning money in Korea anyways?? Jjanggae OUT
2. [+271, -4]
“Ssorry”…? Is that his concept?
3. [+210, -3]
Just go live in China
4. [+185, -1]
Looks like he couldn’t get someone to translate for him in China so this is full of typos… If you look at how Henry typed before, you know that he’s writing typos on purpose
5. [+156, -1]
This bast*rd was speaking Korean just fine in the pastㅎㅎ Looks like he still doesn’t know Korean that well. The fact that he was lying about it makes it even worse, just screw off 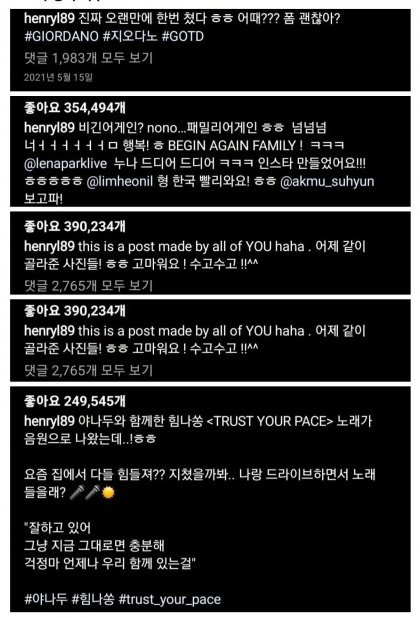