original post: here
1. Seriously, what’s wrong with this f*cker??? Why is he going crazy by himself?? I seriously don’t get it…..
2. Is he senile….? He’s gonna die anyways without resorting to all of this so just why…?
3. Did he catch some incurable disease or something? What’s wrong with him?
4. Putin f*cker, why aren’t you dead?
5. Seriously, he’s going senile. Finally
6. No but is he mentally stable? He’s really saying this without being sarcastic? Isn’t he thinking about Russia’s future?
7. Is he going insane? He doesn’t seem sane
8. Are you sure that Putin isn’t going senile??? Is he a crazy bast*rd? How can he turn out like this?
9. Seriously, is he crazy??
10. Please murder this f*cker, I beg you
[theqoo] RUSSIA’S INTERNAL AFFAIRS REGARDING THE SITUATION IN UKRAINE

1. The war costs 20 billion per day…
2. As expected, economic and manufacturing power is the most important…
3. I hope that in the end, Putin goes to prison
4. I’m praying for a miracle in Ukraineㅠ
5. Saying that it costs 20 billion per day makes this look so fake..
6. Ukraine, may God bless you, please…
7. Ukraine, don’t lose, fighting!!!!!!!!!!!!!!!!!
8. Seriously, war is no joke… this makes me mad
9. If this is true, Ukraine, let’s hold on a bit more
10. This is sad but if this is true, I hope that Ukraine holds on for 10 more days
[theqpp] ZELENSKY DECLINED HIS EVACUATION 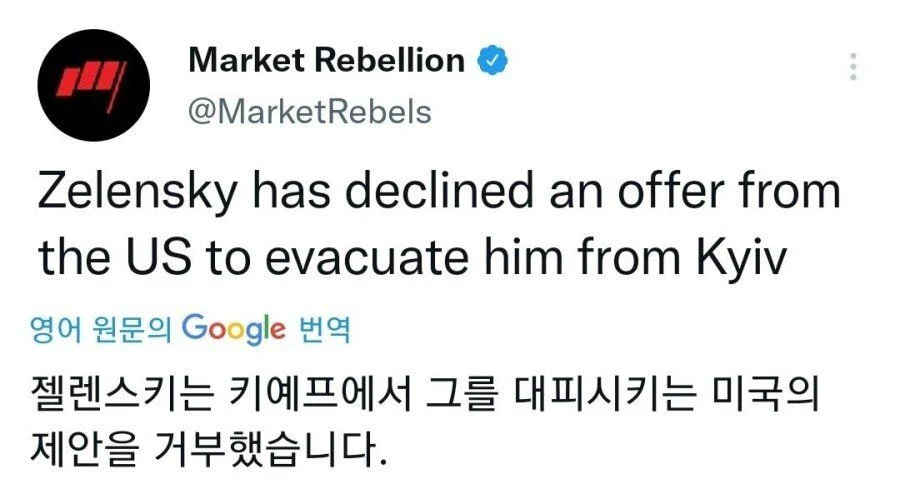 original post: here
1. He’s seriously a great leader ㅠㅠㅠㅠㅠ Please be safeㅠㅠㅠ
2. But I seriously think that it was impossible that war wouldn’t start. They already had pro-Russian spies in their government. Their economy was broken from their pre-war government and they were receiving aid from EU and IMF….
3. What I’m saying is extreme but if you had to choose between a comedian or a spy, which one of them is more powerless?
4. Please be safe!! ㅠㅠ
5. They chose the good president
6. I pray for your safety
7. May God bless you and be with you
8. He’s a powerless person with little experience in foreign affairs and security, but he seems to have a sincere heart for the country.
9. Please be safe…. please
10. Please be safe… I’m crying..
[theqoo] RUSSIAN PUBLIC BROADCAST “HITLER = ZENLENSKY” 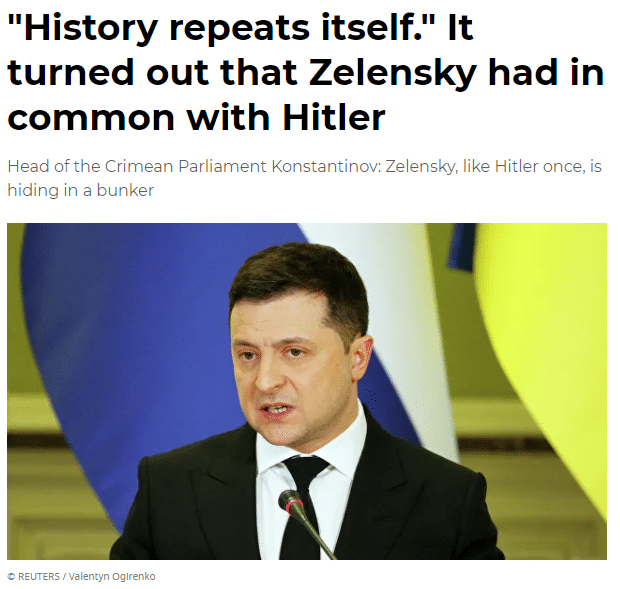 According to the Russian public broadcaster
President Zelensky and Hitler resemble each other
He is equally popular with Ukrainian Nazis.
He challenged his motherland Russia in the same way.
In the same way, they avoided Russia and hid in a bunker, etc.
The news state that the two have a lot in common
They said that history repeats itself
What…
original post: here
1. But everyone knows that Putin = Hitlerㅋㅋㅋㅋㅋㅋㅋㅋㅋㅋㅋㅋㅋㅋㅋㅋㅋ
2. Are they crazy?
3. ? But everyone knows that Putin = Hitler. If you get close to Putin, you’ll find Hitler..
4. What the f*ck? They are making up things from thin air
5. Who’s gonna believe this?ㅋㅋㅋㅋㅋㅋㅋㅋ
6. Putin’s self introduction
7. Is this a self introduction?
8. What are these f*ckers saying? Putin = Hitler
9. ? Wow us this China or Russia?
10. Are they talking about Putin???
[theqoo] PRESIDENT ZELENSKY “ALL I NEED IS AMMO, NOT EVACUATION” 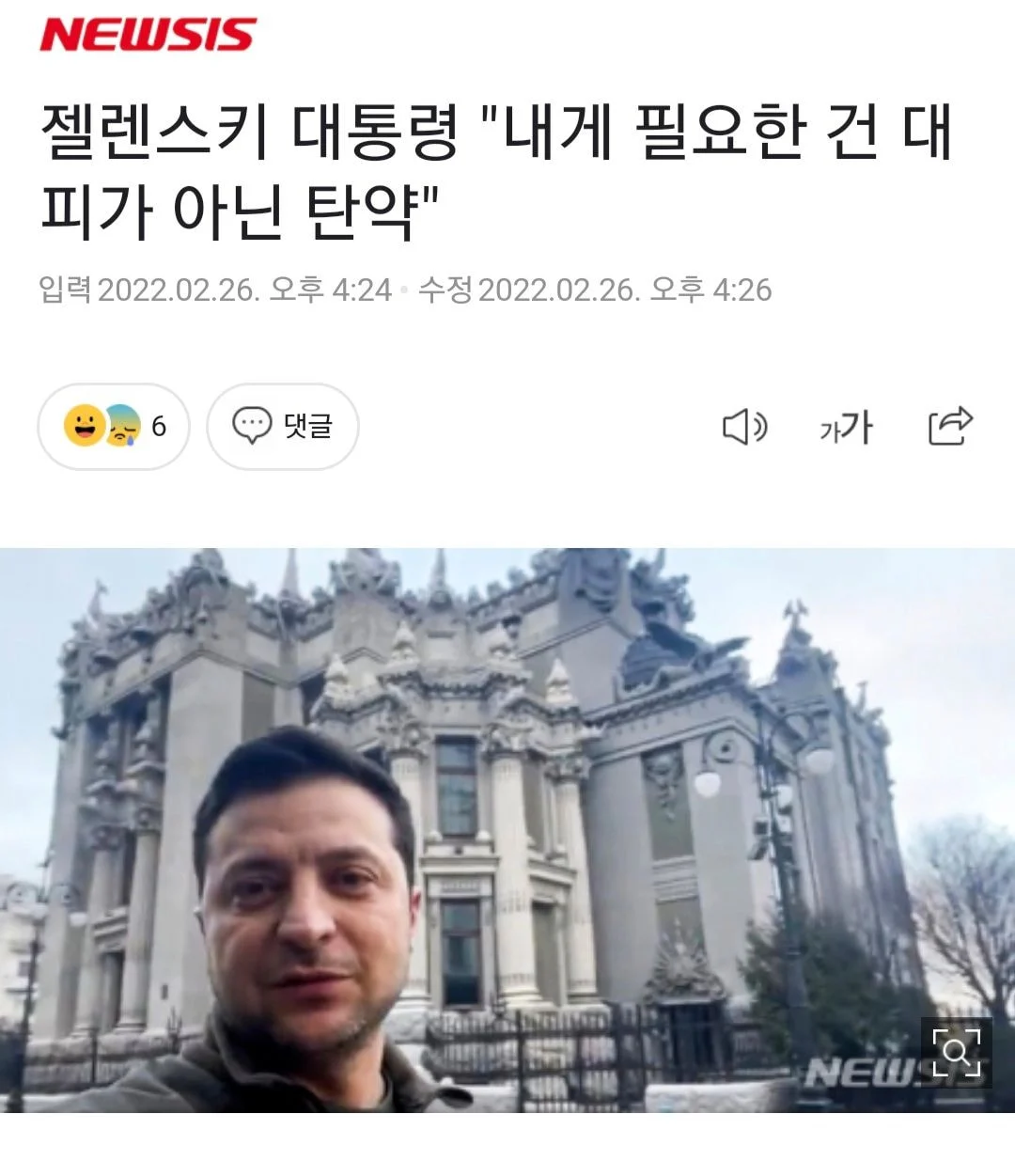 Ukrainian President Volodymyr Zelensky speaks to the people through a smartphone in the center of the capital, Kiev, on the 26th (local time). President Zelensky reportedly rejected a proposal from the US government to help evacuate overseas, saying that “there is a fight going on here” and “I need ammunition, not a ride.” 2022.02.26.

original post: here
1. I’m touched..
2. He’s seriously impressive..
3. The Ukrainians really picked the right president
4. Not only your citizens are supporting you but the whole world is
5. And people are still criticizing a president like him after all these actions? People say that you see someone’s true value in times of crisis. He’s honestly impressive
6. To be honest, he must be so scared but he’s taking responsibility until the end. Not everyone can do that….
7. Slava Ukraini
8. Will a president like him ever exist again? Please survive for Ukraine’s sake
9. Please be safe!! For real, he’s so impressive for staying at his position without fleeing ㅠㅠ
10. Don’t hate on this president when 90% of you netizens would’ve fled
[theqoo] ANONYMOUS’ NEW STATUS ON THE WAR IN UKRAINE 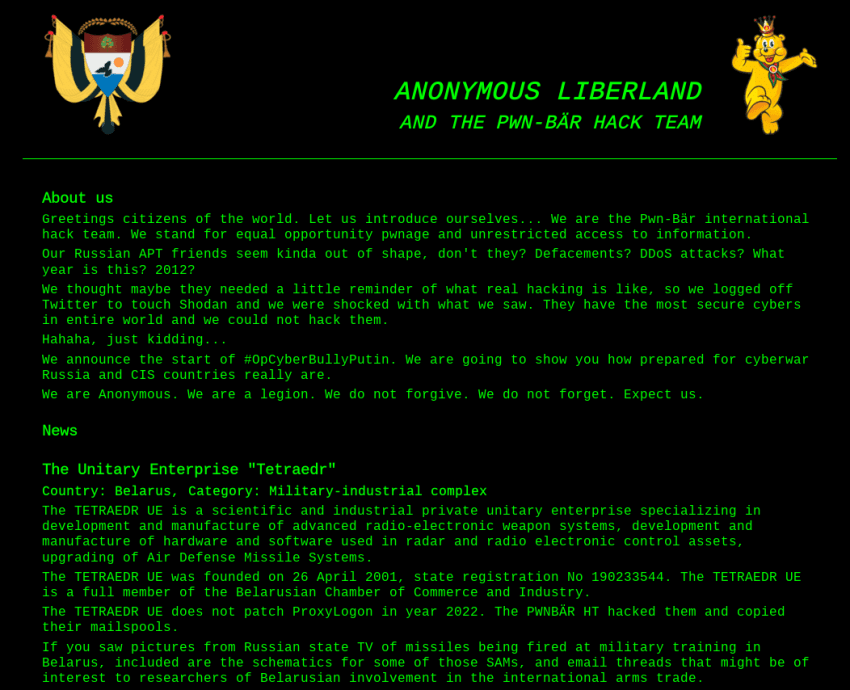 They stole information about where missiles and radars were made.
original post: here
1. Anonymous hacked the Russian government websites 1 hour ago 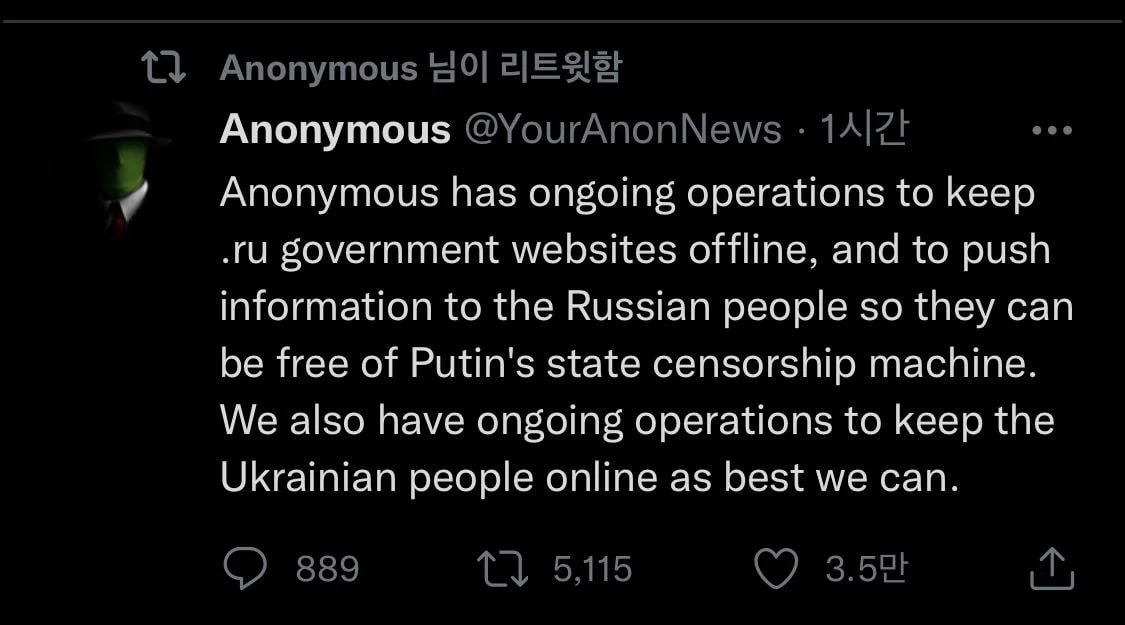 3. They also exposed the drug cartel in Mexico before wow b
4. Wow…
5. I’m getting goosebumps.. so cool..
6. I hope that this is all true…
7. Stealing that information is meaningful because it means that you can know how many missiles and radars you have, where they are being transported, when they are transported, and where they came from.
8. This is it
9. Expose them all
10. Russia never falls behind when it comes to protecting their intel… this is wow
theqoo